Workers’ compensation, the largest product segment in the U.S. commercial lines insurance sector, has experienced a recent profit renaissance, moving to a significant underwriting profit in 2015.

For the property/casualty industry aggregate, workers’ compensation underwriting results have vastly improved in the past five years with the combined ratio moving to 95 in 2015. This is the industry’s first posted result below 100 since 2006. This result compares with a recent cyclical peak combined ratio of 117 in 2011.

The change in fortune for workers’ compensation is attributable to a number of factors, including strong premium revenue growth from better pricing and economic factors, favorable loss cost trends, and favorable loss reserve experience tied to more conservative reserving practices.

Net written premium in workers’ compensation has expanded at an average annual rate of 7 percent from 2011 to 2015, although growth has tapered off recently with a 3.5 percent increase in 2015.

Premium growth reflects improvement in insured exposures from employment and payroll growth, as well as benefits from past pricing changes. The broader commercial lines insurance sector experienced a hardening phase of the market underwriting cycle from approximately mid-year 2011 through the latter half of 2014. As one of the weaker performing market segments at that time, workers’ compensation rate changes were among the highest among individual sectors.

Underwriting improvements and stability in both frequency and claims costs drivers have promoted better loss reserve experience in the segment as well. Loss reserves exhibited moderate deficiencies from 2009 to 2011 amidst the economic recession and weak market conditions. However, reserve experience has turned favorable in the past four years, with favorable prior years reserve changes representing more than 5 percentage points of industry premiums in 2015.

While the workers’ compensation market in aggregate has staged a strong recent recovery in performance, individual company results vary considerably. Shifts in marketshare leadership reveal a relationship between underwriting performance and marketshare growth, as some traditional, large workers’ compensation writers have retrenched in efforts to bounce back from larger recent underwriting losses. Several of the fastest-growing companies have reported significant recent underwriting profits. 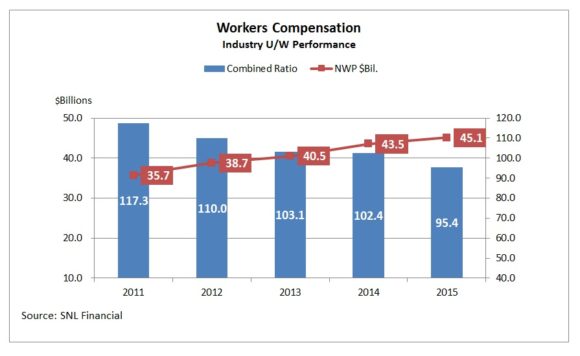 Based on direct written premiums, long-time market participants Travelers and Hartford held the No. 1 and No. 2 workers’ compensation market positions in 2014 and 2015. Traditional market leaders AIG and Liberty Mutual have dropped to the fifth- and seventh-largest positions in efforts to reverse poorer segment underwriting results.

AIG and Liberty Mutual have posted five-year average net combined ratios in workers’ compensation that are worse than industry averages – and is only exceeded by the State Compensation Insurance Fund, California’s insurer of last resort, among the top 10 writers.

The historical cyclicality of workers’ compensation underwriting results and the rarity of underwriting profits naturally leads to questions regarding the sustainability of future profits. Market fundamentals are becoming less attractive due to competitive dynamics and other external forces (economic, regulatory, legal), which makes it likely that combined ratios will rise in 2016 and that a return to underwriting losses is probable in 2017.

The hardening market in workers’ compensation peaked in 2014. Underwriting success and ample market underwriting capacity are promoting a market shift in which renewal premium rates are now broadly in decline. The Council of Insurance Agents & Brokers (CIAB) Commercial Lines Market Survey indicates that workers’ compensation renewal premium rates have declined for the past five consecutive quarters and are falling at an accelerating rate. In a soft market environment, more proficient underwriters manage the cycle by moving more swiftly to cull less profitable accounts when competitor prices swing more aggressively.

Use of Underwriting Technology.

Expansion of data analysis and more sophisticated use of information technology continue to accelerate in the insurance market. More extensive use of data from internal underwriting and claims information, and a wider universe of external sources in predictive modeling and analysis, can provide benefits in risk selection, pricing differentiation and reduced claims volatility.

Underwriters with greater diversification in terms of account size, industry and hazard class, geographic mix, and an ability to adjust to changing opportunities within underwriting subsegments have greater opportunities to succeed in the constantly evolving workers’ compensation market.

Workers’ compensation insurance across individual states can be quite different in terms of pricing, underwriting regulations, benefits and claims requirements, and legal environment. These factors can greatly influence the ability for an insurer to have consistent underwriting success in a market.

As an example of the variability of state circumstances, California, the largest state for workers’ compensation by premium volume, is historically more volatile than the overall industry. Recently, however, the state combined ratio returned to a level below 100 – in part as a result of the impact of recent legislative reforms on claims costs, which is now leading to heightened price pressure within the market. Conversely, Florida, the fifth largest state for workers’ compensation, is likely to see large future rate increases as two recent court rulings regarding attorney fee limits in workers’ compensation (Marvin Castellanos v. Next door company, et al.), and the length of benefit payments (Bradley Westphal v. City of St. Petersburg) are anticipated to increase claims costs in the state.

The workers’ compensation market has benefited from relatively stable claims trends in recent years. The evolution of risk management and employee safety practices has favorably influenced long-term workers’ compensation claims frequency patterns. In its annual State of the Line Report presentation, the National Council on Compensation Insurance (NCCI) stated that claims frequency declined by 3 percent in accident-year 2015. Claims severity trends also moved favorably in 2015.
According to the NCCI, workers’ compensation indemnity cost severity was up by only 1 percent in 2015, while medical costs, which traditionally exhibited higher inflation levels, actually decreased by 1 percent for the year.

Uncertainty remains regarding future medical claims cost trends, particularly relating to the implementation and evolution of the Affordable Care Act. Growth in prescription drug costs in workers’ compensation claims are another factor that can influence future medical severity. 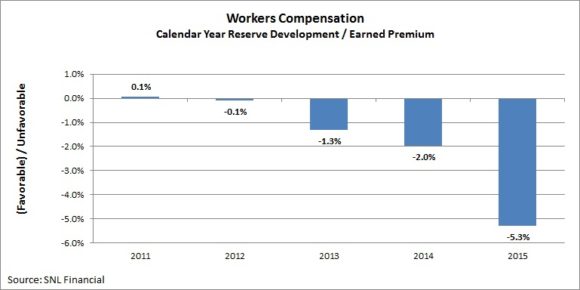 While considerable attention is given to the effects of continued low interest rates and inflation on investment yields and performance, another consequence of these conditions is greater predictability in insurance claims losses, particularly in longer tail lines such as workers’ compensation. The onset of any future rise in claims costs, particularly medical costs, and inflation, could materialize rather quickly. Promptly recognizing the effects of these changes in loss reserves and accident-year profitability can boost the chance for future pricing to more accurately reflect a shift in claims trends. 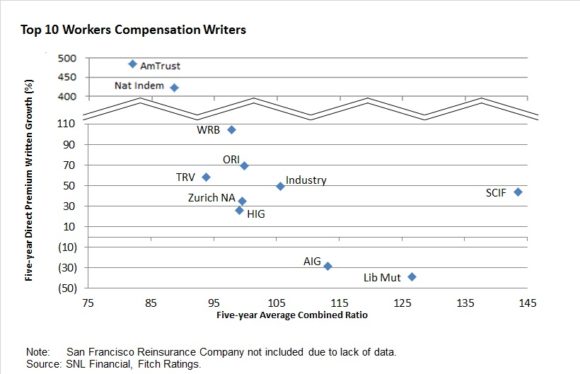 Outside of underwriting performance. Property/casualty insurers have reported flat to declining changes in investment income, given a prolonged extremely low interest rate environment. A lower yield on investments adds to the imperative for insurers to produce meaningful annual underwriting profits to generate an adequate return on capital.

While individual underwriters hold varying levels of risk assets (common equities, high yield bonds, limited partnerships, private equity or hedge funds), the P/C industry has not greatly increased asset risk exposures in response to declining bond yields. In contrast, a number of insurers have reduced portfolio durations in anticipation of future interest rate increases that are yet to materialize, which further restricted the investment contribution to earnings.

When the next material increase in interest rates transpires, it will take some time for insurers’ bond portfolios book yields to adjust. In the meantime, a prudent course of action lies in maintaining closer durations between loss reserves and fixed income assets backing liabilities, while staying within risk appetite allocations for assets with equity market risk.

About James B. Auden