The outbreak of coronavirus has already resulted in some workers’ compensation claims and more are expected. But whether those claims are going to succeed depends on the individual circumstances and the state where the infection occurred.

Kentucky Employers Mutual Insurance Co. announced effective immediately it will pay wage-replacement benefits for any first responder or employee in the medical field who is quarantined because of direct exposure to a person diagnosed with COVID-19.

Ryan Worthern, communications director for KEMI, said the insurer’s staff decided to adopt the policy, but informed its board of directors and Gov. Andy Beshear of the decision.

“Based on our interpretation of Kentucky workers’ compensation laws and given the unprecedented circumstances surrounding this pandemic, KEMI policyholders needed the assurance of knowing that KEMI will provide the appropriate care and benefits for those first responders affected by COVID-19,” Worthern said in an email. “Taking care of our own is exactly what KEMI was created to do, and we are grateful to know that our board fully supports this swift action.”

KEMI’s announcement follows a decision March 5 by the Washington state Department of Labor and Industries to pay wage-loss and medical treatment expenses for any health care worker or first responder who is quarantined because of coronavirus exposure.

Washington operates a monopoly workers’ comp system, so that policy impacts every employee in the state who is covered by the state system.

L&I spokesman Tim Church said the department has already received several workers’ compensation claims due to coronavirus exposure, but he did not know if they were filed by medical or health care workers. Church said a quarantine normally would not be covered by workers’ comp unless the worker was made ill by workplace exposure.

Church said coronavirus claims by Washington workers outside of health care or emergency services will be decided on a case-by-case basis.

The National Council on Compensation Insurance, a rate advisory organization for most U.S. states, said that it remains to be seen whether other states will follow Washington state’s lead. NCCI said that many state workers’ comp statutes exclude “ordinary diseases of life” such as the common cold or flu.

However, NCCI said at least 10 states have issued mandates for coverage of coronavirus by health insurers. The directives vary but include coverage for testing and visits to emergency rooms or urgent care facilities without deductibles or copays, NCCI said. “These measures, if expanded to more states, could have the impact of limiting claim activity in the WC market in those cases where only testing or quarantine are necessary,” NCCI said.

John F. Burton, a retired Rutgers University professor and national workers’ compensation expert, told the Society of Human Resources Management that some states have specific lists of occupational diseases in statute, and coronavirus “is certainly not on those lists.”

Megan B. Caramore, a partner with Vandeventer Black in Norfolk, told SHRM that obtaining coverage in Virginia will be an uphill battle under that state’s system, but workers covered under federal law.

“The Virginia Workers’ Compensation Act requires the claimant to prove that ordinary disease of life arose out of the employment by clear and convincing evidence (a heightened burden of proof),” Caramore explained in an email. “Under the Longshore and Harbor Workers’ Compensation Act, the claimant is frequently entitled to a presumption that the injury/illness is related to the work, and the employer bears the burden of rebutting the presumption.” 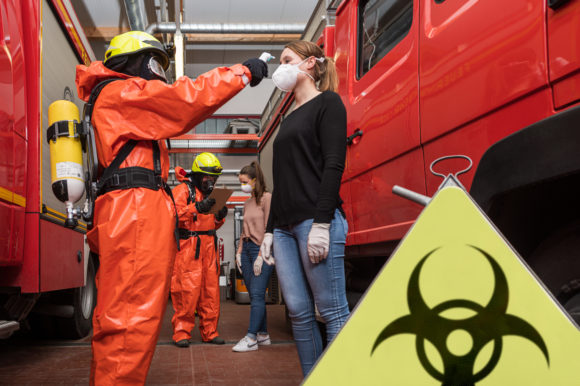 Fisher Phillips, a national law firm that specializes in employment law, said whether COVID-19 is compensable under workers’ comp depends on the specific facts. The worker must show that the illness or disease arose out of or was caused by conditions peculiar to the work and that he or she had a greater risk of contracting the disease and in a different manner than the general public, the firm said.

Woodruff Sawyer, a national insurance broker, gave two examples illustrating how differently state workers’ compensation laws treat occupational illnesses. In South Carolina, a contagious disease is not covered for workers who contracted the disease from co-workers or who faced equal exposure while away from work. In California, employees sickened by communicable diseases were able to get benefits by showing they were particularly vulnerable.

Woodruff Sawyer said a Disneyland employee who contracted measles was awarded benefits for the illness in 2015 because he showed he had been exposed to unvaccinated foreign visitors at the park. California workers who were exposed to dust while on the job also won claims seeking coverage for valley fever, which is caused by fungus spores that live in soil.

Two insurance carriers gave notice of their stand toward the coming workers’ comp claims in notices earlier this month: Texas Mutual Insurance Co. and SAIF, Oregon’s state-chartered workers’ comp insurer, both issued bulletins that said they will decide whether coronavirus exposure is compensable on a case-by-case basis.

Texas Mutual added this caveat: “However, the more widespread COVID-19 becomes, the more difficult it may be for the employee to show that it is work related rather than an ordinary disease of life to which the general public is exposed.”

A white paper issued by Aon explains why greater exposure to the general public tends to limit liability for workers’ comp. “While every jurisdiction has specific laws pertaining to workers’ compensation and communicable disease claims, the general rule for most industries is that the matter would likely not be deemed compensable if the employee was considered at no greater risk than the general public.”