Cape Town’s water crisis, which saw the drought-hit city come within 90 days of turning off the taps earlier this year, highlights the threats to South African companies from a repeat event and should serve as a warning to vulnerable cities worldwide, analysts from UBS Group AG wrote in a report.

New Delhi and Hyderabad in India, Beijing, among other Chinese cities, Jakarta, Singapore and Sydney in the Asia-Pacific region, Brussels and Rome in Europe, along with San Francisco and the Manhattan area in the U.S. are some of those with relatively high water risks, the UBS analysts said, citing information from the World Resources Institute.

With the city in the grips of a record drought, Cape Town authorities in January told residents that their supplies could be cut in April as dam levels dwindled dangerously below 30 percent. That risk has receded after a recovery in rainfall and severe restrictions on water use, with the so-called “Day Zero” pushed out to at least 2019. Dam levels have risen to 63.5 percent, city authorities said Tuesday.

But Cape Town “is not yet out of the woods,” the UBS analysts wrote in their report Tuesday. The Swiss bank cited work by scientists suggesting that global warming has tripled the risk of a three-year dry run in the Western Cape province, increasing the risk of a repeat of 2018’s “water crunch.”

Here are some of the UBS analysts’ views about the impact on South African companies from a return of the water crisis in Cape Town:

–With assistance from James Cone. 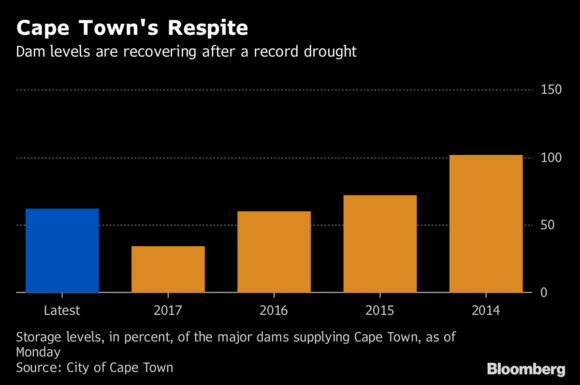