After spring showers failed to show in Germany, the official water level at Kaub — a key chokepoint near Frankfurt — dropped to around 1 meter on June 3, its lowest for the time of year in at least two decades, according to Germany’s WSV inland waterway agency.

That’s prompting fears of a repeat of disruption seen in 2018 when waters fell so low the river became impassable to industrial ships, severing downriver factories from North Sea ports.

With its source high in the Swiss Alps, the Rhine snakes more than 800 miles (1,300 kilometers) and carries cargo barges through some of Europe’s most important industrial zones before emptying into the North Sea at Rotterdam.

A mix of glacial run-off and rain feeds the river, but contributions from glaciers have dwindled in recent years as summer melting outpaces ice formation in winter thanks to global warming.

Forecasters have warned that Europe faces a tinder-dry summer, conditions that would spark a repeat of an October 2018 impasse that was severe enough to dent German economic growth.

Rhine waters have dropped 40% since the start of April, according to data from the WSV. That’s after central Europe experienced an exceptionally dry spring, with rainfall below its usual levels, according to Germany’s DWD federal weather service.

Worsening matters, groundwater levels have dwindled after record-breaking heatwaves in 2019 further dried out soil and wilted vegetation from consecutive years of drought.

“All these usual sources of water are much reduced this year,” said Joerg Belz of Germany’s BAFG inland waterways agency. “If we see months of drought then we’ll see extremely low waters like in 2018.”

Barges hauling diesel-type fuel along the river were recently limited to loading just 40% of their cargo if they planned to sail past Kaub, according to Riverlake Barging, a specialist inland barge brokerage.

If the low water levels are sustained, refineries using the Rhine will have to throttle back output more quickly than in 2018, because the fuel demand destruction from coronavirus means there’s less storage available, according to Alan Gelder, vice president for refining, chemicals and oil markets at Wood Mackenzie. 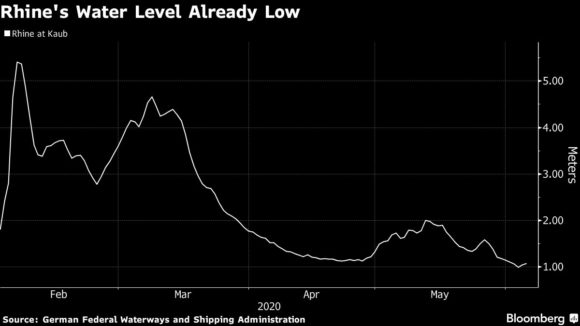 Germany’s transport ministry last year unveiled a package of measures it hopes will keep the Rhine passable as global warming continues to dry up the region. The measures, including dredging shallower stretches of the flow and investment in weather forecasting might not prevent the 2018 disruption becoming the norm, according to the WSV rivers agency.

“We’re only two years down the track and it’s reappeared,” Gelder at Wood Mackenzie said.

Photograph: Cargo ships maneuver near the the banks of Rhine River on Nov. 09, 2018 near Kaub, Germany. Record low water levels were caused by a summer heat wave in Germany and a European drought. Photo credit: Maja Hitij/Getty Images.