With pandemic restrictions in the UK largely gone, offices are getting busier. Yet vast numbers of desks still remain empty.

Even with COVID-19 case numbers flat or falling in the UK, U.S. and much of Europe, many employees are still actively choosing to work from home for at least part of the week. It’s increasingly hard for managers to claim that their offices will simply fill up when the virus abates.

Companies large and small are now adopting hybrid work patterns unrecognizable from pre-pandemic routines — all but killing off the five-day-a-week commute.

Few predicted such a seismic shift, even when the pandemic began. “Everybody really did have an expectation that it would all go back to normal. And I think now is a dawning realization that it isn’t,” said Julia Hobsbawm, author of The Nowhere Office: Reinventing Work and the Workplace of the Future, to be published in the UK this month and the U.S. in April.

Firms or managers toying with a full-time return face an uncomfortable reality, experts say: Without significant pay incentives that only the richest firms can offer, staff are increasingly likely to look elsewhere. For everyone else, wholesale changes to workplace culture are needed to retain and attract the best.

Almost a year after Goldman Sachs Group Inc. Chief Executive Officer David Solomon famously called working from home “an aberration,” the bank he leads is still sticking to its guns. Goldman’s expectation is that staff will work from the office, according to a person familiar with the matter who declined to be named.

Policies at other banks are more nuanced. JPMorgan Chase & Co. expects UK-based staff back in the office for at least some days a week. Citigroup Inc. has similar plans. Standard Chartered Plc and HSBC Holdings Plc are embracing hybrid working arrangements, without mandating in-office requirements. Similarly, NatWest Group Plc expects 87% of staff to split their work between home and office in the long-term.

More than two-thirds of people (68%) now prefer a hybrid working model, according to Future Forum’s latest quarterly survey of almost 11,000 knowledge workers in Australia, France, Germany, the UK and U.S. Just 30% of those surveyed currently work from the office every day. In addition, 95% of respondents want flexibility over times when they work.

For his part, Goldman’s Solomon remains bullish on getting staff back to work. The bank has given no details on what level of remote-work is permitted, if any, pointing only to comments Solomon made on an earnings call last year.

“Let me be clear, achieving the objective of bringing our colleagues back to the office is not inconsistent with the desire to provide our people with the flexibility they need to manage their personal and professional lives, which is the way we have always run this firm,” Solomon said on the April 2021 call.

Most companies will struggle with this kind of approach, according to Claire McCartney, senior policy adviser at the UK’s Chartered Institute of Personnel and Development. “If organizations force people into the office without a clear rationale, it’s going to impact upon motivation, and it will eventually lead to people leaving,” she said.

Finance is one industry that may try, and partially succeed, in mandating a significant return to the office, says Hobsbawm. Elsewhere, though, she believes that Britain and the U.S. are undergoing a “great re-evaluation,” a profound cultural shift around attitudes to work.

“There is no wholesale return to the office that will stick.”

In London, the rate at which staff are returning to their desks is accelerating, but Underground Tube journeys in the city stood at just 58% of 2019 levels, according to government figures released last week. Bloomberg’s Pret Index showed that transactions in London’s financial districts reached at 78% of pre-pandemic levels, 10 percentage points lower than the 2021 peak. In New York, sales in the Wall Street area are only 41% of normal levels. 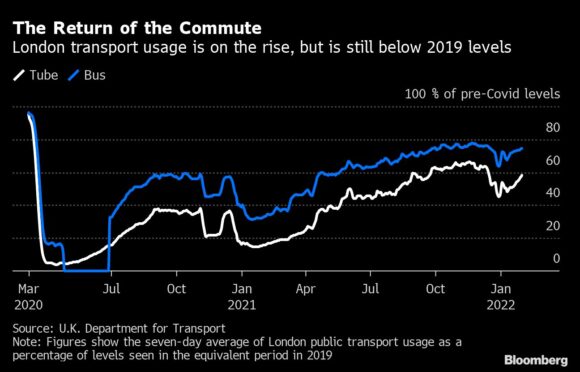 Some companies are seizing the hybrid moment to reinvent how they work. In Germany, Volkswagen AG, one of the country’s largest employers, plans “maximum flexibility” post-pandemic, alongside training for executives and managers.

Healthcare provider Bupa Ltd. is also focusing on managers. It wants fewer long meetings and now encourages short, frequent check-ins with teams and individuals. Managers are now trained on how to set clear goals and then measure performance, a move Bupa feels will only benefit its 84,000-strong workforce.

“Honestly, the kind of capabilities that we’re equipping our managers with now, they probably always should have had,” said Julie Stephens, Bupa’s director of wellbeing, health and safety.

Others, especially those with a high proportion of younger staff, are attempting to tread a Gen-Z version of the same high wire Goldman Sachs is already balancing on.

UK online retailer Asos Plc, known for its fast-fashion, wants its 3,800 predominantly young staff “in more than you’re out.” Many employees “missed the buzz of our offices,” the company said. And while Asos says “meaningful office connectivity” delivers the best results, it stresses that its policy isn’t “one-size-fits-all.”

Asos’s approach mixes a commitment to flexibility with a reminder that business priorities matter, epitomising the dilemma many firms face. Younger workers in particular are increasingly seeking out employers that they perceive demonstrate purpose and integrity.

“Especially when it comes to professional, highly-skilled jobs, it’s a workers’ market. They are dictating the terms of what they need,” said Mary Asante, director of HR Independents, an organization that supports human resources professionals.

Citi wants staff to learn, coach, innovate and problem-solve together. That’s a modern approach, though James Bardrick, Citi’s country officer for the UK, draws a parallel with a different time. “I learned most of what I did when I started 35 years ago by watching and listening to more experienced people around me, whether I was taking notes or making tea.”

Companies like Citi, which place a premium on office life, are facing a test: Can they roll out hybrid work policies that are flexible enough to keep staff happy and get their people back on-site?

Some are going further than redesigning buildings. Fintech companies such as Revolut Ltd. and Eigen Technologies Ltd. are already committed to letting staff work full-time from anywhere.

The move “was one of the hardest decisions I’ve ever had to make,” Eigen co-founder and Chief Executive Officer Lewis Liu said in an interview. “One of things you lose when you go fully remote is one of the purposes of why you work.”

To ensure staff remain engaged, Eigen encourages them to attend cheese and wine events in the office and holds off-site planning sessions at locations like Monkey Island Estate, a luxury hotel in Berkshire, outside London.

Similarly, investment bank Peel Hunt LLP brought staff back in for a two-week “big bang” last year to reconnect with the company. “It was an absolute winner,” CEO Steven Fine said. “I reckon I had 90% of eligible staff in, and then after that they go back to doing whatever their manager is happy with them doing.”

The scale of change will cause casualties. Centuries-old insurance market Lloyd’s of London is reviewing its real estate needs, fueling speculation it could leave its iconic London headquarters. The City’s Lord Mayor, Vincent Keaveny, a partner at law firm DLA Piper, fears for the financial district’s cafes, restaurant, dentists, doctors, and gyms. “We need people back to support those businesses,” he said.

Others report a sense of drift and confusion. One fund manager based in London who ventured into his office found only five other people there. Another said constant changes in regulations confused his team, and he now thinks it will be hard to bring them back. A third noted that many staff now choose to work from home on Mondays and Fridays, and lamented the increasing lack of face-to-face contact.

“The structure of the working days has got to be established, but it will be place by place,” said Hobsbawm, whose “Nowhere Office” theory challenges the always-on, always-in culture that dominated the knowledge economy for years before the pandemic struck.

“I absolutely have sympathy with Goldman Sachs and any organization trying to balance what it needs to do on a daily basis,” said Hobsbawm. “But what I would say to all the business leaders and policymakers is please, take a look around you. Please read the room.”

–With assistance from Katie Linsell and Monica Raymunt.