Independent agencies and their carriers perform a variety of tasks for policyholders when originating and servicing policies, but how they handle claims provides the moment of truth—and it’s more important than almost anything else in the agent’s mind when choosing carriers.

Also, the adjuster’s first call to the insured matters most—even more than getting the claim paid quickly.

These are some of the emerging findings in the forthcoming survey “2010 Survey of Agent-Carrier Relationships,” which polled more than 1,500 agencies in all 50 states and asked questions about various aspects of their relationships with the carriers they represent.

Agency principals and producers take a variety of carrier performance factors into account when choosing which to rely on for most of their business. Using a derived importance method, researchers learned that agencies favor carriers who perform above average on claims service quality, financial strength and underwriting expertise, as would be expected. 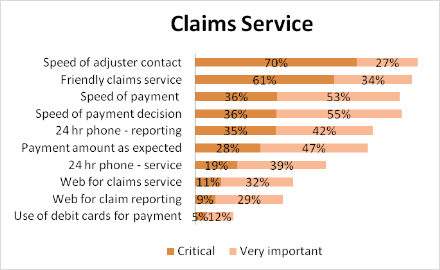 “We weren’t surprised that independent agents prioritize claims service, financial strength and underwriting expertise when choosing carriers,” said Kevin Jenné, lead researcher for this study and research director for Channel Harvest, which conducted the survey. “What did surprise us is what agents will tolerate—including average and even below-average performance on training and education, field rep support and agency compensation.”

For example, 41 percent of agency respondents said that their top carrier was “average” or “below average” on agency compensation, but only 13 percent of them said their go-to carrier was average or less on financial strength or claims service quality.

What Matters on Claims Service Quality?

Among 10 different factors specifically related to claims service quality, agency respondents placed far more importance on speed of adjuster contact with the policyholder than on speed of payment. Speed of adjuster contact was rated as “critical” by 70 percent of respondents, compared with only 35 percent saying that speed of payment was critical. One carrier was given as an example of superior claims service because of its “fast claims service, a call to insured within the hour.” Several respondents noted the advantages of local adjusters. As one agent noted, “We have a local claims adjuster assigned to our agency and he is very accessible to both the agency and to our insureds after they have a claim.”

Agents say friendly claims service is much more important than meeting policyholders’ expectations on claim payment amounts. Fully 61 percent of respondents rated friendly service as critical, while only 28 percent considered providing the expected payment amount as critical. One agent describing a top carrier said, “They are kind, courteous, and treat people how they themselves would like to be treated, no matter how small or large the claim happens to be.” Another emphasized the importance of the personal touch by noting that their “claims reps are always pleasant, helpful and sympathetic to clients’ needs and concerns.”

The survey was sponsored by Insurance Journal and conducted by Channel Harvest—a partnership between Aartrijk and Campbell Communications. Insurance Journal will report more selected findings of the survey, such as independent agent attitudes on industry issues, in subsequent articles. It’s the first survey of its kind that drills down into the specifics of important issues such as claims service quality, field representative performance, and underwriting appetite.

The survey instrument covered more than 100 separate questions. More than 1,500 agents responded to the survey and passed validation criteria. For most general questions in the survey, the number of responses yielded a margin of error of 3 percent at a 95 percent confidence level. Quantitative survey results are presented in a variety of formats, including importance rankings of specific carrier attributes, industry issues, and open-ended agency comments about what breaks superior carriers out from the pack.

The study “2010 Survey of Agent-Carrier Relationships,” is the third in a series tracking agents’ views on issues in the insurance marketplace. For more information on obtaining the survey report, contact Peter van Aartrijk at peter@Aartrijk.com.