More than eight-in-10 Americans now believe the climate is changing – although they place that concern beneath issues like global political instability, economic crisis or a pandemic.

Munich Re America’s inaugural 2014 Climate Change Barometer survey released on Tuesday shows that 83 percent of the 1,000-plus Americans surveyed believe climate change is occurring, and 63 percent are concerned about changes in the frequency and intensity of natural disasters, such as floods, hurricanes and tornadoes.

The survey shows Americans living in the Northeast the most concerned about climate change. More than seven-in-10 of Northeast residents are concerned about changes in the severity of weather events, more than those in the West (65 percent), while concern in the Midwest (60 percent) and South (59 percent) followed.

With opinions on climate change in Europe known to be strong, Ernst Rauch, one of the heads of Munich Re’s geo risks department, said the survey is important to the international carrier to get a handle on how American’s feel about it. 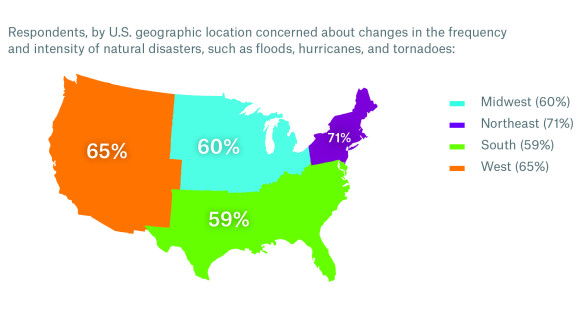 In Europe, for instance, climate change is part of a mainstream debate, while in other countries there is no debate at all.

The U.S. was perceived to be somewhere in between, he said.

“It has changed and this is one of the most interesting outcomes of this survey,” Rauch said, adding that in the past most Americans were believed to be reluctant in accepting the position that climate change is real. “This survey to us was a surprise.”

Seventy-one percent of Americans believe that to most effectively slow down climate change a greater emphasis should be placed on using alternative energy, while 66 percent of those surveyed support government-backed tax incentives to drive business or consumer behavior, the survey shows.

More than six-in-10 believe education initiatives about ways households can reduce their carbon footprint would be most effective, according to the survey.

Asked what they plan to do about it, 63 percent of those surveyed plan to fortify or have already fortified their homes to protect themselves from future severe weather events, and 47 percent have purchased or plan to purchase an additional insurance policy, such as flood or earthquake insurance.

Nearly half (47 percent) would consider moving away from hazard-prone areas, the survey shows.

Despite increased awareness of climatic issues and the long-term risks of change associated with them, the survey found that Americans are least concerned about climate change compared with other potential crises.

When asked which of four potential crises is of greatest concern, only 14 percent named climate change, compared to global political instability (31 percent), an economic crisis (27 percent) or a pandemic (22 percent).

Paired with evidence that shows Americans are starting to care more about climate change, those results presented a sort of paradox for the survey authors.

“Obviously now climate change is part of the American mainstream thinking, but it when it comes to the question ‘What is a concern to you?’ climate change ranks in a lower place,” Rauch said.

Rauch surmised that the rise in awareness and concern over climate change among Americans is due to the extreme weather events that have hit the U.S. in that last two decades – Hurricane Katrina, Superstorm Sandy, the ongoing drought in the West.

“I think the broader public realized extreme weather patterns are now affecting them, and this could be a driver in the change of perceptions,” Rauch said.

While there are no immediate plans to start on another survey, Rauch said there are a few next questions to ask.

“To me the next logical question is to ask a bit more concrete questions about adaptation,” he said.

He’d also like to have survey participants field a few questions on how they acquire knowledge about climate change.

“How do you get informed on a more constant basis about climate change, about the science, about the means of adaptation? Is it from the news, or social media?” he said.

The results of survey are based on a national probability sample of 1,008 telephone interviews conducted among adults 18 years of age or older (502 males and 506 females) living in private households in the continental U.S.

Since insurance-related risk management focuses on how atmospheric changes affect losses caused by severe weather events regardless of cause, this survey did not ask specifically about human-made global warming, but about significant change in the measures of climate, according to the authors of the survey.