The majority of property/casualty insurers do not expect autonomous or self-driving vehicles to have a real impact on their auto insurance business for another decade and have not adjusted their business models to prepare for the disruption.

Many insurer executives also believe that government will slow the introduction of autonomous vehicles.

That’s according to a new report based on the Automobile Insurance in the Era of Autonomous Vehicles Survey by the advisory services firm, KPMG.

In surveying senior U.S. insurance executives whose companies, in aggregate, account for almost $85 billion in personal and commercial auto premium, KPMG found skepticism about the potential transformation autonomous vehicles will bring in the near-term.

According to KPMG, few carriers have taken action—not due to doubts about the possible ramifications, but rather because most believe the change will happen far into the future, if at all. In fact, 84 percent of executives don’t expect autonomous vehicles to have a significant impact on their business until 2025, while 42 percent expect a significant impact in six to 10 years.

In addition, more than half of respondents (55 percent) believe that regulators will impede the adoption of autonomous vehicles, which KPMG says may help to explain why the insurance executives anticipate a more distant effect on their business.

“The disruption of autonomous vehicles to the entire automotive ecosystem will be profound, and the change will happen faster than most in the insurance industry think,” said Jerry Albright, principal in KPMG’s Actuarial and Insurance Risk practice, said in a release on the survey.

Albright said new technologies making cars safer are impacting underwriting practices, claim frequency and severity as well as auto premiums. “To remain relevant in the future, insurers must evaluate their exposure and make necessary adjustments to their business models, corporate strategy and operations,” he said.

According to the survey, only 29 percent of executives feel very knowledgeable about autonomous vehicles, and a small percentage (10 percent) have developed a strategic plan to deal with the impact. Most respondents say they are only in the “discussion phase” or have done nothing at all to prepare, despite acknowledging an expected decline in claim frequency and premium per policy.

With regard to the business areas that will be most significantly affected by autonomous vehicles, executives most frequently cited underwriting (61 percent), product management (52 percent), and claims (52 percent). In fact, 94 percent identified “understanding the underwriting impact” of autonomous vehicles as the most critical area of focus, as many expect they would have to decrease the premiums charged for personal and commercial auto insurance.

KPMG also says insurers must prepare for the changes that ride-hailing services and transportation network companies like Uber are going to bring to personal and commercial auto, as well as to manufacturers and products liability.

“As the trend towards car-sharing proliferates and mobility-on-demand companies like Uber and Lyft become more popular, commercial lines likely will take a larger share of the automobile insurance pie,” said Alex Bell, a managing director in KPMG’s CIO Advisory practice. “The share of the personal auto insurance sector will likely continue to shrink as the potential liability of the software developer and manufacturer increases. At the same time, losses covered by products liability policies are likely to increase given that the sophisticated technology that underpins autonomous vehicles will also need to be insured.”

When asked which components of personal and commercial auto coverage would change the most in an autonomous vehicle landscape, executives most frequently cited liability (94 percent), followed by property damage (52 percent) and medical/PIP (29 percent). Further, 71 percent believe the cost of vehicle parts replacement will be more expensive.

When asked how autonomous vehicles will impact the insurance industry over the next 10 years, executives said they expect the ecosystem to evolve. In particular, executives point to the emergence of niche writers (42 percent) and new providers (39 percent). Other than traditional insurance companies, respondents cited original equipment manufacturers (OEMs) (58 percent); start-up companies (45 percent); established technology firms (39 percent); and investment firms (32 percent) as the major providers of vehicle insurance in the future. At the same time, many anticipate increased consolidation among the traditional writers.

“The potential reduction in car ownership and decreased demand for personal auto insurance could lead to financial stress for less-diversified carriers, triggering consolidation in the insurance industry,” said Joe Schneider, a director at KPMG Corporate Finance LLC. “Assuming consumers demand lower premiums to reflect fewer accidents, there is the possibility of frenzied competition as firms attempt to maintain premium volume to cover operational expenses and market share. This irrational pricing behavior could result in a dangerous downward underwriting spiral for the broader industry.” 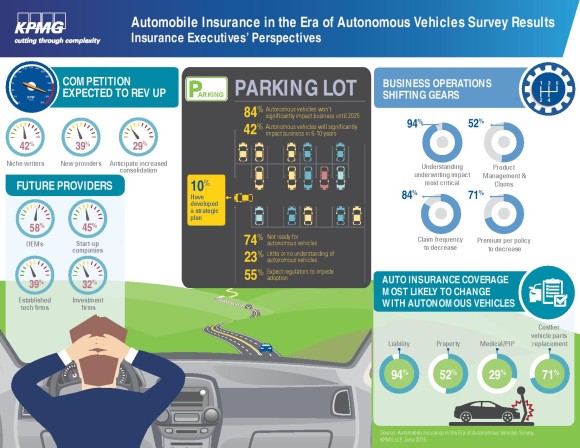