The U.S. workers’ compensation market saw solid gains in 2014, thanks in part to premium increases and favorable claims frequency. This was the fourth consecutive year in which the industry reported improved results, A.M. Best said in a report.

The U.S. workers’ compensation combined ratio came in at 101.5 for 2014. While a combined ratio under 100 is considered healthy, the number reflects steady improvement compared to the 118.1 combined ratio generated in 2010, according to the report. Net premiums written came in at $46.8 billion for the sector in 2014, a steady climb from $34 billion produced in 2010.

A.M. Best noted the improvement but pointed out that the positives are near-term, as uncertainty remains about the industry’s ability to maintain rate adequacy in the longer term.

“While the industry’s underwriting performance benefits from an overall positive rate environment in 2014, competitive market conditions and persistent low investment yields continue to compress operating margins,” A.M. Best said in the report. “Improved fundamentals in recent years appear to indicate that further improvement in results may continue over the near term, given growth in premiums from rate increases and favorable claims frequency relative to claims severity.”

Several giants in the fields shrunk their market share in 2014.

Liberty Mutual Insurance’s U.S. workers’ compensation net premiums written for 2014 dropped a whopping 27.5 percent compared to the previous year. The decline was enough to knock it from second to fifth place in a new A.M. Best special report on the sector’s overall performance.

The insurer produced $2.2 billion in net premiums written during 2014, giving it a 4.8 percent share of the U.S. workers compensation market. That compares to $3 billion, and a 7 percent market share, in 2013, according to numbers compiled by the ratings entity.

A Liberty Mutual spokesperson said the drop is part of the insurer’s strategy to rid itself of weak accounts.

“Over the past several years, Liberty Mutual Insurance has strategically reduced its exposure to workers’ compensation by targeting under-performing accounts that were contributing to unacceptable results,” the company told Carrier Management in a statement. “As a leading provider of commercial insurance today, we continue to be a strong market for workers’ compensation insurance where our claims and loss prevention expertise and customer service focus provide value and superior outcomes to our customers.”

Other top-ranked U.S. workers’ compensation insurers generally maintained their rankings, but some gained premiums and market share while others lost ground. Top-rated Travelers Group, for example, achieved $3.8 billion in net premiums written during 2014 for an 8.2 percent piece of the market. The number is 4.3 percent higher than the $3.68 billion in net premiums written during 2013, which represented an 8.3 percent market share.

Second-place Hartford Insurance Group also grew, with $3 billion in net premiums written during 2014 for a 6.4 percent share of the market—1.4 percent higher than the $2.97 billion generated in 2013, when it had 6.7 percent of the market and was in third place.

This is an edited version of an article published by Carrier Management.com. 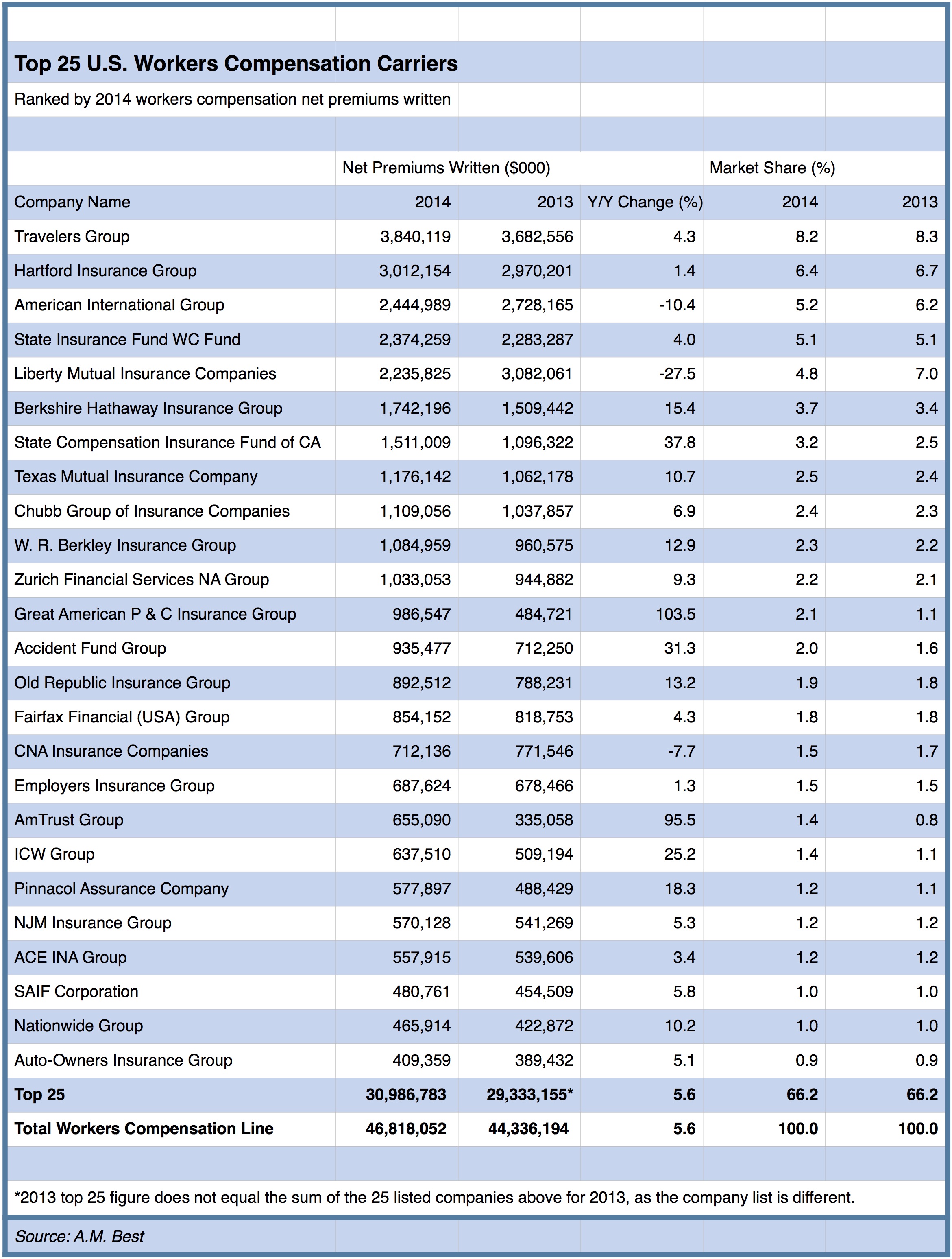