It was a relatively quiet year for natural disasters – except for those living in the Western U.S.

“It was relatively a quiet year, I mean overall,” said Tom Jeffery, a senior hazard scientist at CoreLogic.

He described 2015 as “closer to average or slightly below average” compared with prior years.

However, the report highlights among individual hazard categories a few record-setting events that caused significant damage. 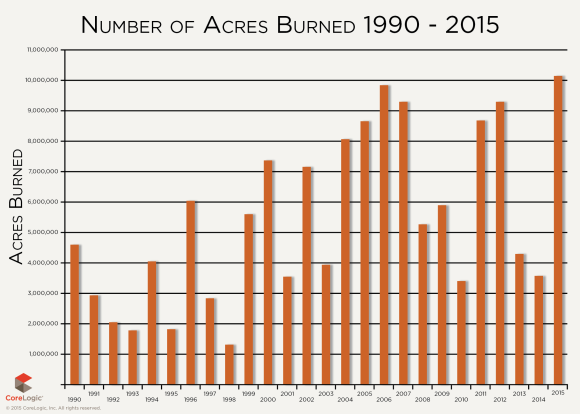 Wildfire activity for 2015 was the worst in recorded history, according to the report, which shows more than 10.1 million acres burned in 2015.

That’s far above the yearly average of 6.57 million acres over the past 15 years, according to CoreLogic.

“A lot of it had to do with the drought that’s occurring in the Western part of the country,” Jeffery said.

Alaska, California, Washington and Oregon led the way for the nation in terms of acreage burned, a result of the four-year drought that plagued the West, Jeffery said.

The past month of El Niño-driven storms may help short-term, but the long-term effects could make things worse, he added.

“I would be hesitant to say the (West) is out if it, but it’s certainly headed in the right direction,” Jeffery said.

He said more rain and more snowpack will help ease drought conditions and reduce the tinderbox effect that’s had a large portion of the Western U.S. under severe fire weather conditions – for now.

“Unfortunately, in terms of wildfire, when we have more moisture in the ground it just means all the vegetation that’s there that has been starving for water in other years is starting to grow,” Jeffery said. “Unfortunately, more vegetation means more fuel for the fires.”

The report doesn’t focus on climate change as a cause of the drought conditions, though several scientists have speculated that global warming is the cause of what many believe to be an ongoing mega drought in the Western region.

“If that’s the case then it’s something we have to consider – what are the long-term impacts of the changes that are potentially going to be with us for a while?” Jeffery said. 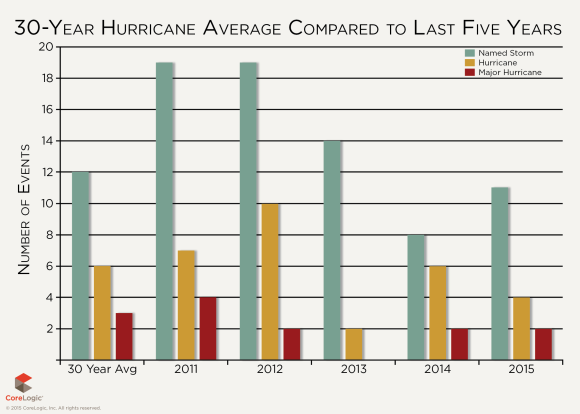 Most of the other perils listed in the report were down for the year, including the all-important number of hurricanes to strike the East Coast.

“Hurricane activity in the Atlantic was below normal for 2015 with only 11 named storms, seven of which never grew stronger than a tropical storm,” the report states. “Of the four storms that were categorized as hurricanes, two were Category 1 and the other two grew into Major hurricanes: Danny, a Category 3, and Joaquin, a Category 4.”

Jeffery credits the reduction in other perils to the quiet hurricane season.

“If you have to look at one reason you would have to point at the hurricanes,” Jeffery said.

Excessive rain, flooding and severe weather conditions that can lead to increased tornadoes, flooding and sinkholes can be linked to hurricane activity had they come on shore.

“It has kind of a domino effect on some of these hazards,” he said. “Until that turns around, we could probably see some of these lower numbers.”

Jeffery, along with the rest of the insurance community, is waiting to see how this year’s hurricane forecast will look. But with wind patterns in the upper atmosphere in the Atlantic pushing hurricanes out to sea, the damages wreaked by storms will continue to be muted, he said.

“But long-term, we are going to see devastating hurricanes come back and impact the eastern shores – no doubt about that,” Jeffery said.

Although no hurricanes made landfall in 2015 and no substantial wind or storm-surge damage occurred, storm-related precipitation from Tropical Storm Ana, Tropical Storm Bill and Hurricane Joaquin resulted in record-setting inland flooding, according to the report.

“Based on the snapshot statistics from the National Oceanic Atmospheric Administration (NOAA) Storm Event Database, property losses from flash flood events in the first nine months of 2015 were more than 15 percent higher than the losses from riverine floods,” the report states. 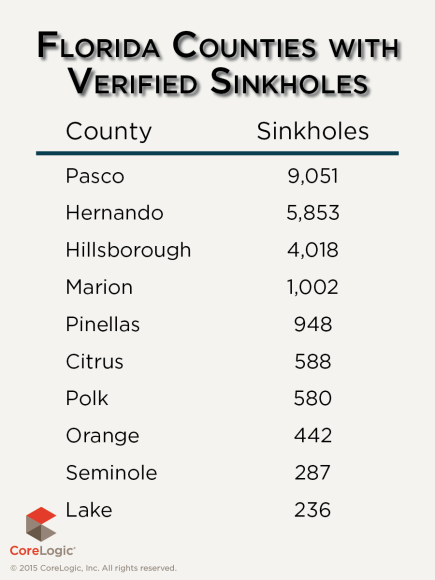 South Carolina was hit with record-setting, 1,000-year rainfall. The report blames the brunt of the deluge on Hurricane Joaquin, which led to riverine and flash flooding in 22 counties and caused $1.5 billion worth of damage, including $587 million in agricultural losses, $181 million in insurance claims and $35 million in tourism losses.

Other findings in the report include:

Earthquakes were apparently on the rise. Last year was characterized by “a slightly higher-than-average number of earthquakes” of magnitude 3.0 or greater, although none produced significant damage or losses, the report states.

Oklahoma experienced four times more earthquakes than both California and Oregon, two states that traditionally have the nation’s greatest seismic activity, although the majority of quakes in Oklahoma were of smaller magnitude – less than M4.0 – than those in California, the report shows.

“There has been an increase in the number of earthquakes in the central U.S. caused by induced seismicity which is defined as not related to naturally occurring (tectonic) activity,” the report states. “Induced earthquakes in the U.S. can occur as a result of hydraulic fracturing or wastewater injection associated with natural gas exploration. This could explain why earthquake activity in Oklahoma, Kansas and northern Texas has increased in recent years.”