Berkshire Hathaway reported a 10.5 percent drop in operating profit for its insurance and reinsurance operations during the third quarter, with underwriting income falling 34 percent. 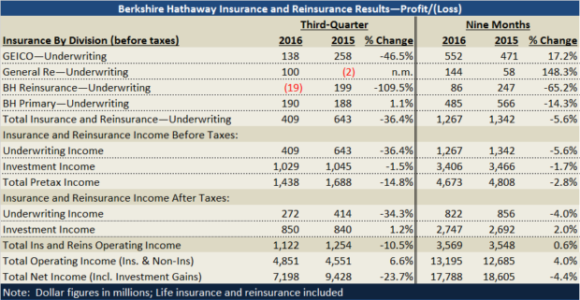 Focusing on the property/casualty side of the business, earned premiums increased for the primary businesses—nearly 12 percent for GEICO and 14 percent for Berkshire Hathaway Primary in the quarter. While reinsurance P/C premiums fell 10.8 percent overall, the earned premium drop for Gen Re P/C was just under 6.0 percent, and Gen Re’s combined ratio came in under 90.0. A lack of significant catastrophe losses and a $160 million takedown of prior-year reserves on property reinsurance business contributed to the result.

The $74 million loss for Berkshire Hathaway Reinsurance shown on the chart above combines a $40 million profit for P/C business and $114 million in underwriting losses for retroactive business.

Storm losses and increased claim severities explained part of the movement in GEICO’s combined ratio, which ticked up 2.3 points despite of the beneficial effects of premium rate increases.

Results for all four P/C insurance and reinsurance units for the first nine months are summarized in the chart below.

On the bottom line, Berkshire Hathaway’s net income, which includes investment and derivative gains and losses, came in at $7.2 billion. The figure represented a 24 percent drop from last year’s third-quarter, when $9.4 billion of net income included a $4.4 billion gain related to an investment in Kraft Heinz (recognized on July 2, 2015, in connection with the merger of Kraft Foods and H.J. Heinz).