The U.S. property/casualty insurance industry, which has been facing rising claims bills for extreme weather events, mostly reacted with silence to President Donald Trump’s decision to withdraw the country from the Paris climate change accord.

While corporate leaders from finance, energy, technology and other sectors spoke out last week against and in favor of Trump’s announcement, no leading U.S. insurance executives did so.

Most U.S. insurance industry representatives, including leading insurers and insurer trade groups, opted for silence when asked for reaction by Insurance Journal.

The Insurance Information Institute (III), the major communications organization for the industry, refrained from comment as well.

Most of those who declined comment said they do not comment on political issues. “It’s not really in our wheelhouse,” said one of the groups. 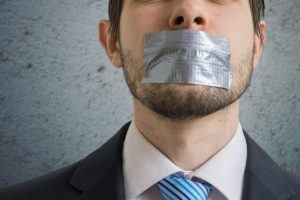 In response to Insurance Journal’s request, PCI issued a statement by Dave Snyder, PCI’s vice president for international policy, that did not mention the actual Paris agreement or the U.S. withdrawal: “Insurers are experiencing increasing losses due to extreme weather events. Considering this, it is particularly important for societies, individuals and communities to focus on reducing their risk of loss from such events through adaptation and mitigation.”

Among the few speaking out were two Europe-based reinsurers critical of the decision.

Breaking the silence on Twitter, Anthony Kuczinski, president and CEO of Munich Reinsurance America, called the Paris agreement a “very important step in mitigating global warning and its risks” and labeled the withdrawal by the U.S. a “serious blow” to mitigating global warming.

Swiss Re, one of several companies like Munich Re that has been out in front in efforts to combat climate change, said that more than 20 studies it has done since 2009 across the globe have found that annualized losses of from 1 to 12 percent of gross domestic product (GDP) result from climate risks. The insurer posted a statement on social media. “Swiss Re very much regrets President Trump’s decision to withdraw from the historic Paris climate accord,” the insurer’s post said. It called the Paris agreement a “key enabler to adopt pre-emptive actions” to combat climate change.

‘We Are Still In’

According to Ceres, a business and public interest group advocating for sustainability and action against climate change, The Hartford, Munich Re America, Swiss Re and Allianz have in the past publicly expressed support for the Paris agreement. Ceres also noted that Allianz and The Hartford are among the more than 1,000 executives and firms signing a new “We Are Still In” initiative pledging to meet the goals of the Paris agreement.

“Over 1,100 businesses, as well as nearly 300 institutional investors with over $17 trillion in assets, urged President Trump to keep America in the Paris Agreement,” Ceres said in a statement for Insurance Journal. “In the wake of the deeply unfortunate announcement of a withdrawal from that agreement, Ceres expects to see corporate and investor demands for — and commitments to — climate action to only grow stronger.”

However several insurance regulators reacted publicly. California Insurance Commissioner Dave Jones called Trump’s decision “one of the worst abdications of United States leadership” and vowed to continue to require insurers in his state to disclose publicly their investments in oil, gas and coal and encourage them to divest from thermal coal.

Similarly, Washington Insurance Commissioner Mike Kreidler criticized the pullout as “short-sighted” and also vowed to continue to require insurers that do business in Washington to report their climate risk annually. “Trump’s efforts to undermine our environment carry a steep price that will be paid for generations to come,” Kreidler warned.

Despite the politics, insurance and reinsurance carriers and executives have addressed climate change over the years, including in 2014 when 66 insurance executives signed The Geneva Association’s statement of principles acknowledging the role insurance can play to tackle climate-related risks. Those signing included CEOs of U.S.-based carriers AIG, Berkshire Hathaway and ACE (now Chubb), as well as leaders of foreign insurance companies.

Frank Nutter, president of the RAA, has stressed the need for the industry to follow the science of climate change, even as it attempts to avoid the divisive politics in the U.S. over the issue. He has noted that European reinsurers like Munich Re, Swiss Re, Zurich and Allianz have been outspoken about their views on climate change.

“There is a clear divide between what largely are European-based companies and the U.S. companies in how they perceive climate change,” Nutter told Insurance Journal’s Don Jergler in an interview in January, 2016.

A commercial lines claims expert for Nationwide Insurance recently told Insurance Journal about how the company has experienced a 26-percent increase in average severity over the three-year period of 2014 to 2016 compared with the seven-year period between 2007 and 2013. It has also recorded a 14-percent increase in unique commercial catastrophe events when comparing those same time periods. When asked whether this was climate change at work, the executive demurred.

“I don’t know that I’m in a position to comment on that, but certainly there’s no question that the winters that we’ve seen in the Midwest and east of the Mississippi are much warmer than we have seen in many years,” he said. “And I think anytime we see that type of warm weather, especially the Midwest and East, it’s going to make for some very disruptive weather patterns, which are very difficult to forecast.”

Even if many aren’t talking the talk about Paris, more insurers are now walking the walk by disclosing their climate risks to regulators. A 2016 report by Ceres credited Allianz, Swiss Re, Erie, Nationwide, The Hartford and Munich Re as carriers with climate risk management best practices.

The report, “Insurer Climate Risk Disclosure Survey Report and Scorecard,” evaluated the quality of responses from insurance companies in the annual National Association of Insurance Commissioners Climate Risk Disclosure Survey. Twenty-two of the insurers studied – including 13 based in the U.S. – earned a “high quality” rating. Overall the results showed marked improvement from responses analyzed in a report issued two years ago, according to Max Messervy, one of the authors of the report and the insurance program manager at Ceres.

Some analysts have viewed the Paris agreement as opening up opportunities for insurers to develop new insurance products and to work with governments in developing countries on new insurance programs.

“This opens up an unprecedented opportunity for the industry to start a very positive, open dialogue with the government towards development of sound, scalable and sustainable insurance programs, as part of which significant amount of innovation can happen,” Mayram Golnaraghi, a climate risk expert with the think tank The Geneva Association, said in March 2016 about the Paris agreement.

In her report Golnaragh claimed that by 2020 the reinsurance sector will not only be providing a wider range of risk-transfer solutions, but also will be supporting emission reduction efforts and transitioning to a low-carbon economy through its investment strategies as well as actively managing its carbon footprint.

But in speaking on climate change, President Trump cited Heritage Foundation research on the Paris agreement, including the claim that compliance with the agreement could “ultimately shrink America’s GDP by $2.5 trillion over a 10 year period.”

The Heritage Foundation claims that the Paris climate accord would cost as many as 400,000 jobs, reduce family income by $20,000 and raise household electricity costs by up to 20 percent — all without delivering any practical environmental benefit.

After Trump made his announcement about the Paris accord, the Heritage Foundation praised him for demonstrating “resolute” leadership” and claimed the Paris agreement would mean “egregious regulation, cronyism, and government spending” that would harm the American economy.

The Wall Street Journal applauded Trump’s move in an editorial, calling the Paris accord “a pledge of phony progress.”