U.S. teenagers are more reckless after their first few years of driving, often becoming overconfident in their abilities and putting themselves at higher risk for accidents, a new study shows.

More than half of high school seniors have car accidents or near misses, compared with 34 percent of sophomores, according to the study conducted by Liberty Mutual Insurance Co. and the group Students Against Destructive Decisions.

More people, including “hyper-connected” teenagers, are distracted by their phones while driving, and insurers are seeking to counter reckless behaviors amid an increase in car accidents in recent years. According to the study, 75 percent of high school seniors “feel confident” in their driving abilities, and 71 percent use a phone behind the wheel. The study said the misplaced confidence could stem from parents who taper off punishment for poor driving after their kids have a year or two of practice under their belts.

“Older teens are still inexperienced drivers — even if they feel otherwise,” Mike Sample, lead driving-safety consultant at Liberty Mutual, said in the report. “Using an app behind the wheel, even glancing away for a second, can impair your driving ability and set off a chain reaction that could lead to a near miss or crash.” 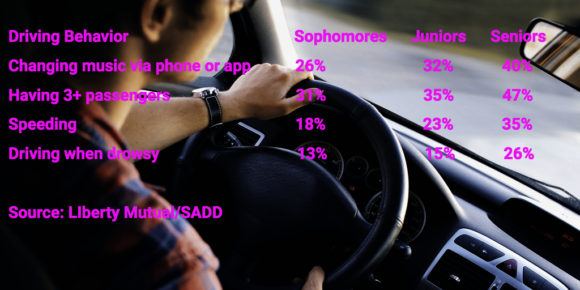 Sam Bessette, a 16-year-old from Topeka, Kansas, said she sticks her phone in the cupholder of her 2009 Ford Escape while she drives.

“My mom is very against it,” Bessette said of distracted driving, “despite the fact she uses her phone all the time. But she tells me she’ll take my car.”

Bessette said she’s a “fairly good” driver, and her friends trust her behind the wheel. She was in a fender bender once, when the driver in front of her slammed on his brakes. She said she’d just barely glanced away to change the radio station and didn’t have enough time to react.

“As a result, it is even more important for parents and teens to have conversations about safe driving practices to avoid potentially putting themselves and others at risk on the road,” Beresin said in the report.

Liberty Mutual, the third-largest U.S. property/casualty insurer, surveyed almost 3,000 teens from high schools across the country and 1,000 parents of young drivers for the study.

The insurer encourages parents to continue teaching their kids, even after they get licenses. Also, adults can use tracking devices that monitor driver habits and reward teens for safety behind the wheel, the Boston-based company said.