Although analysts at Conning didn’t actually use the word “shocked” in their latest report on the property/casualty industry’s loss reserve position, the title of the report—and the image on the front page—made it clear that the analysts didn’t see the answer they got coming.

“The property/casualty insurance industry’s reserve position improved slightly in 2017,” said Bill Burns, Vice President, Insurance Research at Conning, in a statement about the report titled, “2017 Property/Casualty Loss Reserves: Not What We Were Expecting,” which displays a strawberry sliced open to show the inside of a kiwi on its cover.

That’s a figure that caused analysts at Standard & Poor’s Global Ratings to do a double-take too.

The $13 billion “really outpaces the prior years,” observed Tracy Dolin-Benguigui, a director for S&P Global Ratings. “In prior years, you may have had the AIG factor that overshadowed [things] a bit.

“But overall, we really expected this trend to moderate in the coming years. So, it did catch us by surprise,” she said.

Benguigui was referring to the fact the American International Group experienced significant adverse development in several commercial lines in 2016, something that Conning’s report mentions as well— and adjusts for the analysis of the year-end 2017 reserve position. In this year’s data, AIG’s impact on loss development patterns was significant for the other liability segment, so Conning provides results including and excluding AIG for that line of business.

Conning also makes adjustments for distortions related to AmTrust, a top 10 writer of workers comp, which entered into a significant loss reserve development reinsurance agreement last year, causing negative loss development to show up for that line on AmTrust’s 2017 Schedule P. (Conning’s loss reserve studies are based on an extensive analysis of Schedule P of the annual statement using data provided by A.M. Best). Conning completely excluded AmTrust’s data from the workers comp analysis, and presents results including and excluding AmTrust for other liability in the report.

In spite the favorable position of the industry overall, Conning found the other liability lines (claims made and occurrence) to be deficient. 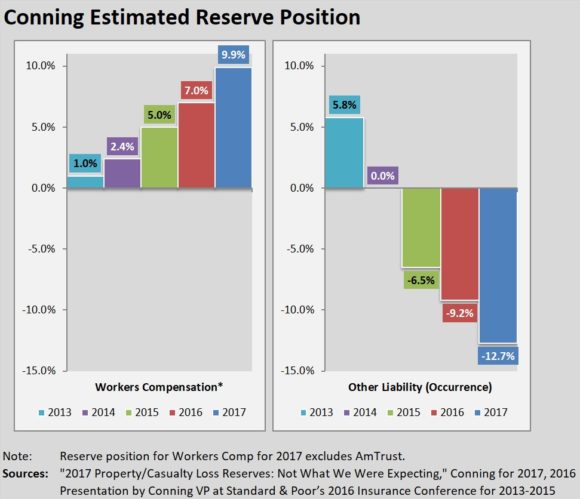 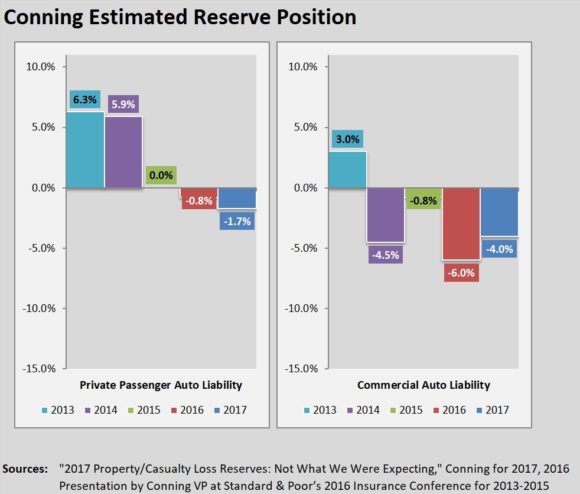 For each of the lines, Conning provides a point estimate and a range around that estimate.

The report also includes a separate analysis of loss reserves for mid-sized insurers, defined by Conning as those with annual premiums between $100 million and $2 billion. These companies outperformed the industry, with reserves that were 5.2 percent redundant at year-end 2017 by Conning’s estimates, the report notes.

Sclafane is executive editor of Carrier Management, where this article was originally published.