Commercial auto insurance hasn’t produced an industrywide combined ratio below 105 in the United States since 2010, according to a Guy Carpenter analysis, which says the line’s poor performance is a key factor in overall property/casualty underwriting results.

“It is an open question regarding which will arrive first: autonomous cars and trucks or underwriting profits for CAL [commercial auto liability] writers,” wrote Nick Durant, managing director, Guy Carpenter, in a commentary published in conjunction with the recent Property Casualty Insurers Association of America (PCI) Annual Meeting in Miami. “Although carriers have been aggressively raising their rates, the increases have not been adequate enough to bring the combined ratios down below 100 percent.”

Industry CAL underwriting results have been deteriorating—both on a calendar-year and accident-year basis—for the past decade, Durant wrote, pointing to an unexpected acceleration in claims frequency related to increased road mileage and congestion as one cause. 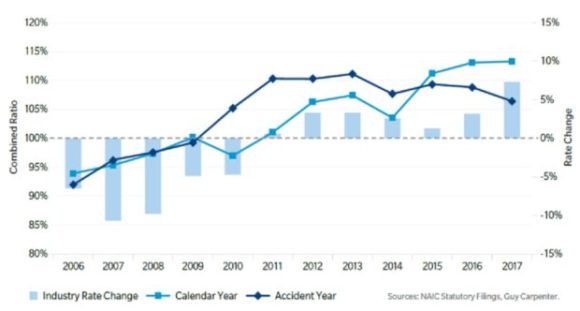 As for what caused the congestion, he pointed to the ride-sharing explosion fueling increased exposures and loss emergence, and to more delivery vehicles on the nation’s roadways. “[A]s the Internet economy and online purchasing grow to levels never anticipated, more trucks and delivery vehicles are sharing the roads, causing congestion and increasing the potential for more accidents,” he wrote.

Other factors include distracted and impaired driving, the commentary says, noting that while the incidence of drunk driving is lower, marijuana use by drivers is up.

Breaking down factors leading to higher severity, Durant’s commentary points to rising jury awards and medical costs as well as inexperienced drivers behind the wheel.

While insurance price hikes haven’t been enough to counter all these negative loss-contributing trends, there are other measures carriers can take, suggests Guy Carpenter, a global risk and reinsurance specialist and a wholly owned subsidiary of Marsh & McLennan Companies. Perhaps predictably, one of the recommended solutions presented in Durant’s commentary is the purchase of reinsurance to address frequency and severity of loss.

Another is managing limits.

Durant had some special advice for carriers that write commercial package policies and multiple casualty lines, saying that they “should avoid the temptation to use CAL to over-subsidize other casualty lines, such as workers compensation and general liability.”

Explaining the comment in a follow-up email to Carrier Management, Durant referred to the fact that “CAL loss ratios and combined ratios are materially higher today than they were from 2003 to 2009—and the line continues to see adverse development.

“Given this, the return on capital for CAL has decreased in recent years. So, those writing commercial package policies or multiple casualty lines cannot depend on underwriting profits from CAL to support under-performance in other lines like workers comp and GL,” he stated.

These days, workers comp is actually performing well for most carriers, Guy Carpenter said in a separate report published this week. In fact, more than 60 percent of carriers have achieved an underwriting profit since 2013, even as rates continue to decline, the firm said in its 2018 Risk Benchmarks Research Report.

Durant sees the prospect of more accurate commercial auto insurance pricing and underwriting on the horizon as carriers use sophisticated predictive models to analyze new and existing data—and even telematics. “Telematics can help insurers deploy behavioral profiling for auto insurance that enables pricing that is dynamic and elastic,” he wrote.

This article was originally published by Carrier Management.