The coronavirus crisis would appear to have put the entire U.S. economy on ice. Twenty-six million people have filed for unemployment in just a month, with millions more likely waiting in electronic queues at overtaxed state unemployment systems.

Still the U.S. job count stood at more than 152 million as of February. Paychecks are arriving for tens of millions of government workers, hospital, sanitation, utility and other employees deemed to be doing essential jobs; an army of employees working from home; and even chefs cooking for carry-out. For roughly 42 million retirees, and millions more with disabilities, monthly Social Security payments continue.

When the first gross domestic product reports of the pandemic era are issued Wednesday, the numbers will show a large hit from the virus-fighting efforts that began in mid-March. Forecasters expect anywhere from $2 trillion to $5 trillion of output to be wiped out by year’s end.

But in a nearly $22-trillion economy, that leaves a lot on the table, the foundation for the gradual reopening being announced by state governments to build upon.

Going Home. How One Insurance Agency Leader Prepared His Firm for Remote Work

Preparations began in early March. One of the first tasks was to take an inventory of who had company-issued laptops, who didn’t, and who had computers at home.

While described as a “lockdown,” the restrictions recommended or put in place around the country have just as often amounted to a rearrangement. For tens of millions of Americans, work has shifted from office to home and moved online. Other businesses may have been ordered to close, but have hunted for ways to cope and maintain some revenue.

For some companies, the pandemic could even bring a bumper year.

Wickliffe, Ohio-based Lubrizol Corp, the specialty chemicals maker owned by Warren Buffett’s Berkshire Hathaway Corp., has avoided layoffs among its 4,700 U.S. employees. And it continues to churn out products like the gelling agent used to make hand sanitizer.

“We’ve tripled our production of that material,” Chief Executive Officer Eric Schnur told Reuters, “and we still can’t get enough of that to our customers.”

Procter & Gamble Co. and Kimberly-Clark Corp. both recently posted their best sales growth in years on demand for cleaning and personal hygiene products, as evidenced by shelves stripped bare of toilet paper at grocery stores nationwide.

None of this is to downplay the staggering blow the pandemic has dealt to the U.S. economy. The United States won’t thrive on teleconferencing and toilet paper, of course, and the scope of the downturn is unprecedented. It could get worse if the virus isn’t controlled or a vaccine developed. In the meantime, small entrepreneurs and those thrown out of work are depending on trillions of dollars in approved government aid to keep them afloat.

Even if the health crisis passes soon and the economic rebound is sharp, there may be lasting structural change — whether in the type of jobs available, the travel and dining habits of consumers, or the look of Main Street if small businesses collapse. 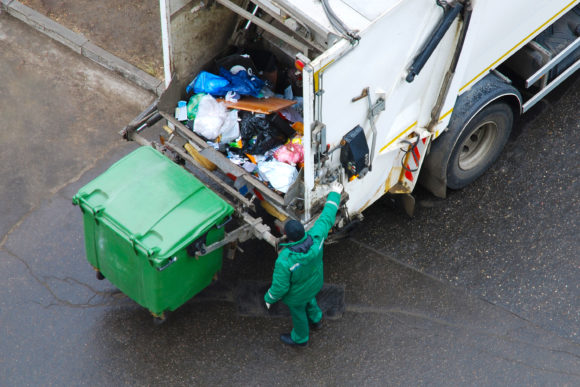 Still, parts of the economy have been buffered.

Start with government, accounting for a steady 17.5% of U.S. gross domestic product at the combined federal, state and local levels over the past three years, or $3.7 trillion of GDP in 2019.

That includes administrators, clerical workers and technology staff running the benefits programs that other Americans now rely upon, as well as firefighters and others who maintain basic services, including teachers leading online classrooms.

Much of that employment is likely to continue, at least for now. But difficult choices loom for state and local governments as costs for their pandemic responses rise, while key revenue sources like sales and income taxes tumble. That could force layoffs.

Calls for a broad package of federal help for local governments have so far been resisted by leading congressional Republicans. However the Federal Reserve this week expanded the scope of a $500-billion lending program for state, county and local governments. That will allow the Fed to buy short-term bonds from hundreds of local government entities to help them raise money needed to pay staff wages and other bills.

The federal government, meanwhile, will borrow massively to fund nearly $3 trillion in emergency programs. A large share of that is in the form of direct payments to households and expanded unemployment benefits. Jobless families will spend much of that on food, housing and perhaps medical care. Consumer spending accounts for about two-thirds of U.S. output.

In contrast to government, the private sector has absorbed a massive blow: Roughly one of every six workers was laid off in the space of a month. Airlines have been grounded, the industry so stricken it was singled out for direct government loans. Hotels and restaurants were also among the direct casualties of social distancing edicts.

But the dramatic headlines mask what’s still going on among two large categories of workers: those working remotely and those whose occupations are deemed “essential.” The latter category encompasses an enormous swath of workers, including front-line medical personnel, public safety officers, people laboring to keep the food supply intact, those distributing goods around the country and utility workers keeping the lights on and the water flowing.

A Brookings Institution study using the Department of Homeland Security’s guidance on “essential industries” estimated that up to 62 million employees might qualify, as much as 40% of total employment before the crisis.

Searches for “telehealth nurse” increased more than 10-fold from March to mid-April on Indeed.com, the job site’s Chief Economist Jed Kolko said in a recent presentation. Online sellers and food retailers, notably Amazon.com Inc. and Walmart Inc., have added tens of thousands of employees to ship goods to homebound Americans instructed not to venture out if possible.

Many of those people bunkered in their houses are still earning income. Up to 37% of U.S. jobs “can plausibly be performed from home,” according to a recent study by Jonathan I. Dingel and Brent Neiman, researchers at the University of Chicago Booth School of Business. They estimated those jobs account for an outsized 46% of U.S. wages, and include perhaps 80% of workers in the finance and insurance industries, and in scientific and professional fields.

Many of those jobs could still prove vulnerable. Architects and civil engineers, for example, could be laid off alongside bricklayers and carpenters if construction slumps. The longer a downturn lasts, the more troubles will mount for the nation’s white-collar workforce.

But even in the hardest-hit industries and states, some activity continues.

Michigan, for example, has been hammered by the coronavirus, with more than 38,000 COVID-19 cases. It ranks in the Top 10 nationally both by the total number of cases and in the infection rate, estimated at roughly 3,400 infections per 100,000 people. Michigan’s automotive sector closed down early, and other industries followed under Governor Gretchen Whitmer’s March 23 stay-at-home order, considered among the strictest in the country.

The unemployment rate in Michigan, among people covered by unemployment insurance, hit 17.4%, the highest in the country.

But even Michigan’s tough rules deemed 14 industries to have at least some essential workers, including financial services, communications and “critical manufacturing,” along with health and public safety.

Restaurants, bars and many retail outlets had to close to the public. But restaurants could still offer carry out, hotels could stay open if they chose, and construction on many types of projects could continue under social distancing rules.

All businesses were allowed to keep some employees on site for “minimum basic operations” such as maintaining equipment and inventory, guarding property, processing payroll or transactions, or supporting those working remotely.

An analysis of Michigan’s unemployment claims by Michael Horrigan, president of the Upjohn Institute, a labor think tank, showed the differential spread of the crisis across industries and gave some sense of the workforce still on the job.

As of mid-April, as many as 54% of workers in Michigan’s construction sector were still employed, according to Horrigan’s analysis. He compared unemployment claims filed in the industry with employment levels as of the first quarter of 2019, the most recent data from the federal government’s comprehensive Quarterly Census of Employment and Wages. For agriculture, finance and utilities the share of workers still employed could be above 90%, he said.

The numbers will no doubt change as more unemployment claims are processed and as restrictions are lifted, a process Whitmer has already begun.

Based on 2019 output levels for the state by industry, if current levels of joblessness held for a year it would cut Michigan’s GDP by perhaps 23%, knocking the state back to where it was in 2013. Nonetheless, that would still mean Michigan workers and factories would generate $422 billion in goods and services this year.

Across the country, firms are coping in different ways. Some are finding small bits of revenue to sustain themselves, while others are adjusting to an unexpected surge in demand.

Utah greenhouse owners Scott and Karin Pynes had built a solid events business alongside selling plants, but those gatherings vanished overnight under social distancing orders. The Pynes don’t expect to be hosting weddings or corporate events anytime soon, they said in a recent webcast seminar on business survival sponsored by the David Eccles School of Business at the University of Utah.

Their business, Cactus and Tropicals, is still taking online orders for plants and offering outdoor displays and pickups. The Pynes are holding video landscaping consultations by Skype and Zoom, and hunting for a new business model that will work as the economy reopens, perhaps under new rules to keep people more distant from each other.

Scott Pynes said the company has scaled back seasonal hiring, but kept around 85 permanent staff on the payroll with the help of a Small Business Administration loan. With the peak season starting on Mother’s Day, he has his fingers crossed.

“We feel confident we will make it through,” he said in an interview with Reuters. “We will be a bit scarred.”

Richard Schwartz, chief executive of Austin, Texas-based Pensa, faces the opposite challenge — keeping up with a burgeoning workload.

Schwartz’s firm offers automated inventory tracking to retailers so they can plan orders, detect shortages and let manufacturers know to ramp production up or down accordingly. It does that with the help of artificial intelligence software and drones that prowl the aisles of stores to count items on shelves.

Pensa’s flying checkers, he said, were a “sleepy” part of the wholesale-to-retail supply chain before coronavirus hit. Many stores were content to use human workers to jot down inventory on clipboards.

With virus-panicked shoppers emptying shelves and manufacturers struggling to keep pace, robots offer a fast way to keep track of inventory and ordering needs. Schwartz says potential customers now are poised to adopt in a matter of months technology they might have rolled out over years.

Technology “normally goes in fits and spurts,” he said.

Coronavirus, Schwartz said, “is one of those accelerators where it shines a light on a problem.”