Property/casualty and life insurance and reinsurance businesses combined recorded $1.7 billion of operating profit after taxes in the first quarter, up from $1.6 billion for the same quarter in 2019.

Across all of Berkshire’s operations, including those not related to insurance, operating income was $5.9 billion. But unrealized investment losses of more than $55 billion meant a bottom line loss of $50 billion.

The biggest driver of the 7.6 percent jump in insurance profit was a 12 percent increase in investment income compared to first-quarter 2019. Underwriting income fell 6.7 percent to $363 million after taxes, mainly as a result of underwriting losses recorded in Berkshire’s life reinsurance operations. 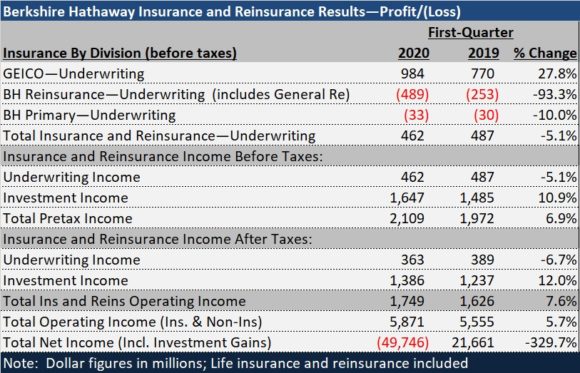 Not Big in Business Interruption

Berkshire’s SEC filing for the first quarter gives no further details the $230 million COVID-19 loss provision for the P/C reinsurance operations, and CEO Warren Buffett did not mention it during the conglomerate’s annual meeting on Saturday. But when asked about the absence of a provision for Berkshire’s insurance operations, he did note that the primary ops aren’t big providers of business interruption coverage in the commercial multiple peril line.

“We will have claims. We will have litigation costs. But proportionally, it’s not the same with us as with some other companies which are heavier in writing business interruption as part of a commercial multi-peril policy,” he said.

Speaking more generally about the state of the industry on business interruption, Buffett said that “many policies quite clearly in the contract language” would not respond to claims for businesses shut down by the pandemic.

“But other policies do. I think I know of one company, I don’t know the details, that’s written a fair amount where…certainly there’s a good argument that they cover business interruption that might arise from a pandemic,” he said, referring to the company twice without disclosing the name. “They are in a very different position than the standard language which says that you recover for business interruption only if [it] involves physical damage to the property.”

Giving a mini-lesson in business income insurance coverage, Buffett asserted, “You don’t automatically get coverage if you have business interruption,” offering two situations to illustrate how the coverage works. In one situation, he noted that one of Berkshire’s properties in France was adjacent to a smaller one that had a fire, which spread to Berkshire’s plant. “It caused a lot of physical damage, and we have business interruption that ties in with that. But if we had some company [that] we were selling auto parts to and they had a strike, our business would be interrupted. But that’s not covered. That’s not part of the coverage unless you specifically really buy it,” he said.

“So, there’s some claims that are going to be very valid related to the present situation. There will be an awful lot, [which] there will be litigation on, that won’t be valid,” he said.

Buffett was asked whether its biggest insurance operation by premium volume, GEICO, will likely experience unusually high profitability in 2020, even after giving customers a 15 percent credit to reflect reduced driving during the pandemic.

Noting the companies are handling the discounts differently, with GEICO giving 15 percent over a period of six months while other insurers are giving higher discounts over a shorter time period, Buffett asserted that GEICO’s total estimated giveback of $2.5 billion is the largest dollar amount. In addition, insurers are giving policyholders more time to pay for insurance. “If they cancel their policy or they don’t end up paying us, we’ve, in effect, given them free insurance during that period,” he said, also speculating there will be more uninsured motorists driving this year. “They cause a disproportionate amount of accidents.

“So, there’s a lot of variables. We made our best guess as to what we’re going to do to reflect the current reduced accidents in our premiums that we receive really for the next year,” he said, noting that while the discounts apply for the six months from April through October, policies renewing in October extend into April.

“We’ve made a guess on it. And we’ll see how it works out,” Buffett said.

During the first quarter, which ended prior to the start of the discount period, GEICO reported $984 million in pretax underwriting earnings, a 28 percent increase over first-quarter 2019, as written premiums grew 4.5 percent to $9.7 billion. With shelter-in-place actions already impacting claims, frequencies fell 12-14 percent for property damage and collision and 6-8 percent for bodily injury, while claim severities rose 6-9 percent for the property coverages and 4-6 percent for bodily injury.

This is excerpted from a more in-depth report on Berkshire Hathaway’s 2020 annual meeting published by CarrierManagement.com.