RLI Corp. has been hiring teams of property insurance professionals as the specialty insurer embraces opportunity in the southeastern U.S. market that others are fleeing, executives said Thursday during a second-quarter earnings conference call.

For the second quarter, RLI reported an 80.2 combined ratio and a 17% jump in premiums across the three segments in which it participates overall — casualty, property and surety. In addition, Chief Operating Officer Jennifer Klobnak put the spotlight on property, where the carrier’s gross premiums soared by 48% for both the quarter and year-to-date, and combined ratios hovered in the mid-60s for both periods. 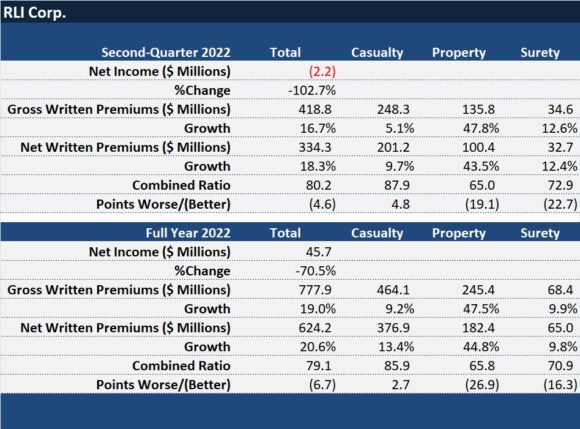 “Admitted markets are absent, and the E&S competitors who remain continue to offer lower limits than historical levels,” she reported. “Several markets announced a renewed focus in this area, but we have not encountered any activity to date,” she said, also reporting that RLI achieved a 24% rate increase on hurricane exposure in the quarter, and that the carrier’s underwriters continued to tighten terms and conditions and risk selection criteria.

“Disruption and uncertainty create opportunities for those who do not waiver from their proven discerning approach,” said Craig Kliethermes, RLI’s president and chief executive officer, at a different point during the earnings call.

Amid reports elsewhere of less available property reinsurance capacity for the Southeast, RLI was able to buy $150 million of additional all-peril catastrophe reinsurance limit at May 1, bringing its coverage limit for hurricane risk up to $625 million excess of $25 million, Klobnak told investment analysts.

Although she said that the growth in RLI’s property exposures slowed toward the end of the quarter “as we work to optimize the use of our new capacity,” she also said RLI has been “hiring to support the growth in all property product groups, including E&S property, marine and Hawaii homeowners.”

Growth isn’t coming at the expense of discipline,” she stressed. “In all areas, we are mindful of increased valuations to ensure we are collecting adequate premium for the exposure. Our terms and conditions are customized to incentivize the insured to disclose appropriate valuations.”

While two other insurers reported property-catastrophe loss amounts that impacted their second-quarter results in recent days — $746 million pretax at multiline Travelers, and $1.1 billion pretax at personal lines insurer Allstate — Klobnak said it was a quiet first half from a catastrophe perspective for RLI.

RLI’s property combined ratios came in around 65 and 66 for the second quarter and first half, respectively.

“We’re entering the second half of the year in a position of strength and expect to meet any new challenges with the same hallmark discipline we have maintained through previous market cycles,” Klobnak said, completing her remarks on the property book.

One analyst pressed the COO to explain how RLI has been able to acquire underwriters with deep experience in the Southeast property markets “where other teams that are supposedly capable have failed in the past,” and also to explain how the company has been able to acquire reinsurance on a cost-effective basis — another big obstacle for participants in the Southeast property insurance market.

“We have hired some people in that region and elsewhere. When we focus on people, we’re looking at both underwriting and claim expertise. It’s not one-sided. You have to think about both sides of the equation,” Klobnak responded.

“With the change in appetite of different competitors pulling back in this space, there are people looking for jobs” — people who want to write property. “Those people are coming from other companies, [but] what we try to do is to show them the RLI approach, which is different…We arm our underwriters with a lot of information and tools. We provide a lot of oversight,” ensuring they pay attention to the terms, conditions and exposure details. “And then we marry them up with claims people who will provide feedback on what’s actually happening with each claim that gets adjusted” — what issues are coming up and “how might we address them from either underwriting or some other perspective to make sure that we’re covering what we want to and [insureds are] paying the amount that makes sense.”

As to the reinsurance question, Klobnak said RLI’s results, and the transparency of results, over the long term make it deserving of differentiation. In particular, explaining the transparency aspect, she said that RLI, which has been in the property market since the early 1980s, had a track record for estimating catastrophe losses without loss “creep” developing in future years. “Nowadays you’re hearing people talking about Ida or different losses where the original estimate was something and now the estimate is larger.”

Focusing on this year’s 48% jump in property premiums, another analyst asked for more information on RLI’s catastrophe exposure profile. Noting that the $25 million hurricane retention has been in place since hurricanes Katrina, Rita and Wilma, she highlighted the carrier’s consistent net appetite for 15-plus years.

“As we think about our catastrophe exposure, we’re looking at a marketplace where this is as good as it gets. And for RLI, when there is a market where you can do what you need to — to cover the exposure and support your brokers and your insureds—this is the time to write the business.”

“A lot of our competitors have pulled back or have gotten out and are missing out on the opportunity. So we’re there.”

She added, “There’s more business than we can handle. Our brokers have a lot of business coming in, and we try to get to as much as we can,” highlighting the need for more capacity. “We obviously pay attention to how much surplus we have, how much reinsurance we buy and what we’re comfortable with from an earning standpoint as well. And that’s why we decided to buy the additional reinsurance limit.”

“From a net perspective, we’re maintaining about the same exposure that we have in the past. We’re just taking advantage of the market, bringing in more premium, actually getting a higher return on the exposure, but ending up with a similar net risk profile.”

Responding to the question of why else RLI didn’t experience the magnitude of weather-related losses that are denting the earnings pictures of other carriers in the second quarter, Klobnak explained that RLI’s exposure is countrywide, including Hawaii and along the coastlines, but it doesn’t have a large footprint in the habitation space in the middle of the country where other carriers are exposed to frequent convective storm losses.

The habitation space “has been underpriced for well over a decade,” she said, adding that another factor setting RLI apart is that it writes much of its property business on a named-peril basis — hurricane only, or earthquake only, without covering other perils.

Klobnak also talked about RLI’s results and the market dynamics in the surety and casualty segments.

For surety, RLI posted a 73 combined ratio in the quarter, with 13% top-line growth. Growth was driven by RLI’s commercial surety group, where the carrier also added staff and is attracting new business. and relationships.

In contract surety, she said RLI’s contractors still have a healthy project pipeline with a backlog of public works projects but that projects are costing more as labor and materials costs rise.

“There has been turmoil in both commercial and contract surety in the industry with several competitors experiencing increased loss activity and underwriter turnover. We’re closely monitoring the financial health of our principals as we navigate the changing economic conditions,” she said.

For casualty, where RLI recorded an 88 second-quarter combined ratio with 5% premium growth, Klobnak attributed a growth slowdown to the Executive Products group, where RLI began exiting cyber and reps and warranties insurance lines last year, and where brokers are pushing for rate decreases for public company directors and officers cover after several years of significant rate hikes.

A growing part of the casualty book for RLI is transportation, where rates jumped 9 percent and premium climbed 13%, Most of the remaining products in the casualty segment demonstrated growth. “Competition in this market has heightened, especially in the truck and public product,” she said. “Competitors in the transportation space seem to have a very short memory regarding loss potential in wheels-based business,” she observed.

In spite of $56 million in underwriting income across all three segments combined, RLI recorded a small bottom-line loss of $2.2 million, or 5 cents per share, for the quarter. While investment income rose 11%, and realized investment gains were $13 million in the quarter, unrealized losses on equity securities of $101 million, impacted overall results.