A wildfire in rural Northern California’s Napa County damaged two homes and forced the evacuation of 200 others, although the blaze has yet to threaten the area’s famed vineyards.

The fire in Pope Valley grew to 4,300 acres, according to a report early Thursday from the California Department of Forestry and Fire Protection. Smoke from the fire could be seen in the Sacramento Valley.

It has damaged nine structures including two homes and threatened hundreds more, officials said. But it was burning to the north of the county’s famous vineyards.

“It has not come anywhere close to what we consider Napa Valley wineries,” said Cate Conniff, a spokeswoman for the Napa Valley Vintners, a nonprofit trade association. “It is moving in the opposite direction, and it continues to move that way. We’re keeping an eye out on it.” 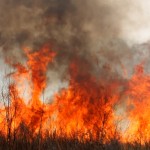 More than 1,000 firefighters were hoping to get a better handle on the blaze after they made progress overnight Tuesday, according to Daniel Berlant, a spokesman for the California Department of Forestry and Fire Protection.

But fire activity increased about noon Wednesday as temperatures again soared into the 90s and the blaze continued burning northeast into neighboring Lake County. The blaze is 30 percent contained, officials said.

Crews have requested more bulldozers from across the state to assist the dozen on site in strengthening containment lines, Berlant said.

No injuries have been reported, and the cause of the fire remains unknown.

The fast-moving blaze began Tuesday afternoon in Napa County. Within hours, it covered 600 acres and then spiked to 2,700 acres by late evening as it spread northeast. State firefighters and crews from Napa, Lake and Solano counties spent a second day working in 90-degree weather on Wednesday.

Similar high temperatures were expected again today. The fire exploded because of dry conditions across the state, Berlant said.