A preliminary storm survey determined a tornado that hit the east-central Montana town of Baker last weekend reached the EF-3 level, matching the strongest tornadoes ever recorded in the state, the National Weather Service said.

The tornado was on the ground for about 10 minutes Saturday evening, and traveled about a half-mile, destroying six homes and damaging more than 50. Several people were injured. The tornado exhibited EF-3 winds, at speeds of 135 to 165 mph, in a one-block area, the weather service said.

The tornado, which formed over Baker Lake, threw debris like all-terrain vehicles, freezers and a nearby park gazebo into the lake. One witness reported seeing a couple of cows thrown into the water, The Billings Gazette reported. 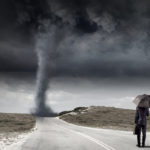 The lake is closed to boating, fishing and swimming while it is cleaned and tested for contaminants, said Chuck Lee, Fallon County Disaster and Emergency Services coordinator.

Officials don’t have a damage estimate, but believe it exceeds $1 million not including the cost of cleaning up the lake, Lee said.

Montana has seen four tornados that rated a 3 on the Enhanced Fujita intensity scale since record keeping began in 1950. One person died in an EF-3 in Wibaux County in 1952. EF-3 tornadoes were reported in Chouteau County in 1988, Sheridan County in 2010 and Carter County in 2014. The Sheridan County tornado touched down on a ranch about 15 miles west of the town of Reserve, killing Steven D. Smith, 46, and Robert Richardson, 10.