All eight outdoor warning sirens in a North Dakota oil patch city were sounded before a deadly tornado ravaged an RV park, but park residents and others said they didn’t hear them, authorities said.

A newborn baby was killed and more than two dozen people were injured when the storm moved through Watford City shortly after midnight Tuesday. More than 120 structures were demolished.

Karolin Jappe, the McKenzie County emergency manager, said all of the sirens functioned properly, including one within blocks of the RV park.

“When you put a siren in that environment you aren’t going to hear that unless you’re outside. And nobody would be outside in that weather,” Jappe said. “I’ve never heard a storm that loud in the six years I have been in North Dakota.”

Mary Senger, emergency manager for Burleigh County in Bismarck, said it’s not unusual for high winds to distort the sound of a siren, which typically has a 1-mile radius. She said the systems are meant to alert people who are engaged in outdoor activities and most of the sirens are placed near parks, sporting venues or other recreational areas.

“The cheapest insurance that people can buy is an all-hazard weather radio,” Senger said. “We can’t promote those things enough.” 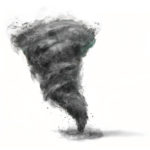 McKenzie County Sheriff Gary Schwartzenberger said he lives on a hill overlooking the park and he didn’t hear the sirens.

“When it went over our house it sounded just like a 757 jet engine,” Schwartzenberger said. “It was crazy. I didn’t think it was going to be that loud and that strong.”

Prairie View RV park resident Clifford Bowden said he and his neighbors didn’t hear sirens but someone he knows who lives across town heard them.

“It was pretty calm on that side of town,” Bowden said.

Ken Simosko, National Weather Service meteorologist in Bismarck, said a severe thunderstorm warning with the possibility of a tornado was issued about 60 minutes in advance of the storm. He declined to talk about what impact the storm would have on the sound of warning sirens.

Schwartzenberger said there are numerous shelters in the city, some of them within minutes of the RV park.

The tornado destroyed 122 structures and damaged about 200 more, though about 120 are still habitable, Mike Nowatzki, spokesman for Gov. Doug Burgum, said Wednesday.

Schwartzenberger reported to Burgum and other officials late Tuesday that the boy who was killed was the son of Marisa Reber and Will Maguire, according to The Bismarck Tribune. A GoFundMe account set up for the couple showed more than 250 people had donated more than $14,200 as of early Wednesday.

Lt. Matthew Watkins of the McKenzie County Sheriff’s Office said the number of people injured stood at 29 on Wednesday afternoon, but he expected that number to rise. Nine of those are in critical condition, he said.

National Weather Service meteorologist John Paul Martin classified the tornado as an EF2, which is defined by wind speeds between 111 and 135 mph. Wind speeds reached 127 mph in Watford City, damaging mobile homes and overturning campers in the RV park that sprung up during the recent oil boom.

About 150 people went to the Watford City Civic Center where the Red Cross set up a shelter after the storm. About 60 people including 14 children remained there early Wednesday, according to spokeswoman Gretchen Hjelmstad. The Red Cross is opening a resource center at the Watford City Civic Center for individuals and families affected by the storm, which will be open from 9 a.m. to 7 p.m. Thursday.

Schwartzenberger said cleanup efforts “with equipment and manpower” were in full swing Wednesday.

“Things are kind of controlled chaos this morning,” he said. “It is a pretty somber day.”