In the conglomerate’s annual report published on Saturday, Berkshire Hathaway’s Chair Warren Buffett recommended that readers focus on operating earnings, reviewing a year in which insurance operations contributed $6.1 billion to a $24.8 billion total.

While total operating income rose 71 percent to nearly $25 billion for insurance and non-insurance operations for 2018, net income fell to $4.0 billion—less than one-tenth of the prior year’s total.

A long footnote in a media release summarizing some of the key financial statement figures discusses an accounting rule change that puts a $20.6 billion loss—representing a reduced level unrealized gains from stock holdings for the year—into the net income calculation.

“As I emphasized in the 2017 annual report, neither Berkshire’s Vice Chairman, Charlie Munger, nor I believe that rule to be sensible. Rather, both of us have consistently thought that at Berkshire this mark-to-market change would produce what I described as ‘wild and capricious swings in our bottom line,'” Buffett wrote in his letter to shareholders.

“Our advice? Focus on operating earnings, paying little attention to gains or losses of any variety,” he concluded.

Another factor contributing to the share drop in net income for the year was the one-time tax benefit of more than $29 billion recorded in 2017 related to the passage of the Tax Cuts and Jobs Act in December 2017.

In this year’s report, Buffett also spent time dissuading investors who obsess over the details of Berkshire’s “many and diverse businesses”—or “economic trees.” Understanding the forest—or more correctly, five clusters of businesses and financial assets—is a less “mind-numbing” exercise, Buffett suggests. Among them, wholly owned non-insurance operations are the first grove, while insurance and reinsurance operations are the fifth.

As in prior years, Buffett’s 2018 letter highlights a key value of the insurance grove—the float available for investment. In addition, he wrote, “Our property/casualty insurance business—our fifth grove—has been the engine propelling Berkshire’s growth since 1967, the year we acquired National Indemnity and its sister company, National Fire & Marine, for $8.6 million.”

Growth, however, did not show up on the revenue line for aggregated P/C operations. With earned premiums for the reinsurance businesses dropping 48 percent, total P/C earned premiums sank 7.2 percent to $50.9 billion in spite of 13 percent premium jumps for GEICO and other primary insurance operations.

“Berkshire has now operated at an underwriting profit for 15 of the past 16 years, the exception being 2017, when our pretax loss was $3.2 billion,” Buffett wrote, including results of life reinsurance operations as well. “For the entire 16-year span, our pretax gain totaled $27 billion, of which $2 billion was recorded in 2018,” he added.

Only the P/C reinsurance operations had underwriting losses for 2018, although the $985 million total came in lower than 2017’s $2.9 billion.

GEICO reported $2.4 billion in underwriting profit—a combined ratio of 92.7—with lower losses from catastrophes and prior year loss events, together with increased average premiums per policy, contributing to the improvement.

Berkshire Hathaway Primary Group reported a lower underwriting profit in 2018 than in 2017—$670 million vs. $719 million a year earlier. 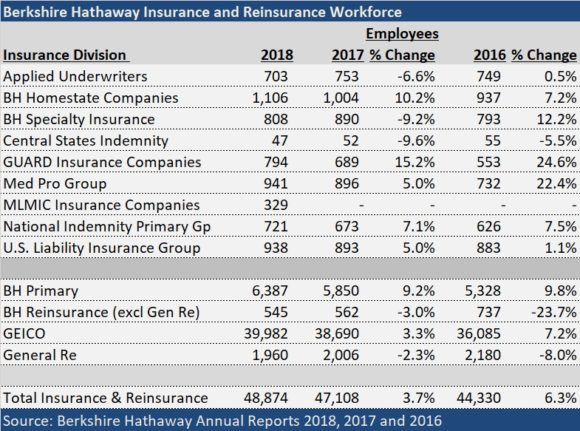 One high-profile employment announcement also made it into Buffett’s letter—the retirement of long-time GEICO CEO Tony Nicely, who was succeeded by former president Bill Roberts in June of last year.

The letter made no mention of Berkshire’s recently announced commercial insurance offering—a three-page policy for small businesses. But readers looking for the annual statement on the Berkshire Hathaway website couldn’t miss a teaser prompting visitors to find out more about the new venture at the top of the page where all the annual statements are available—a box at the top of the page announcing, “Berkshire Hathaway is reinventing small business insurance. Click here to find out more.“