A survey of North American insurance professionals reveals widespread use of predictive analytics in the property/casualty insurance industry, with as many as 82 percent responding that they use predictive modeling in one or more lines.

Earnix, a provider of pricing and customer analytics to banks and insurers, and ISO, the Verisk property/casualty insurance rate and information service, released the results of a joint industry survey, Insurance Predictive Modeling Survey. The firms compiled responses collected online in September from 269 insurance professionals representing companies that sell personal and commercial coverage in Canada and the United States.

While only 18 percent of the professionals surveyed said their companies did not use predictive analytics in any line of business, the most common line for the remainder was personal auto (49 percent). Lines like commercial property and even workers’ compensation and general liability were also indicated by some survey respondents.

The most common uses of predictive modeling are in pricing (loss cost modeling and tiering) and underwriting, while analytics are used to a lesser extent for marketing, claims (fraud investigation, claims forecasting and triaging) and reserving.

Benefits cited by survey respondents are:

Top challenges mentioned by respondents include lack of sufficient data and limited numbers of skilled modelers. 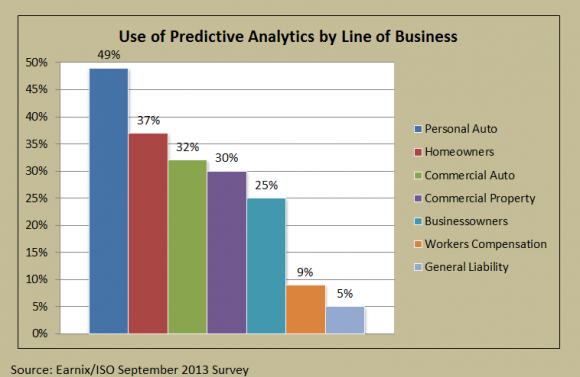