Just a little over six months ago, ACE announced a deal to acquire the high-net-worth personal lines business of Fireman’s Fund from Allianz, competing against Chubb, which holds the leading position in the space.

The announcement that ACE will buy Chubb instead of continuing to compete against the experienced competitor prompted some speculation on the part of an analyst in a recent conference call. The analyst asked ACE’s CEO Evan Greenberg whether the latest deal announcement meant ACE is essentially admitting that it “can’t really build an agency juggernaut in personal lines to compete with Chubb.”

“Of course not. Are you kidding me? We’ve built a good personal lines business…and high net worth is a dynamic and open area within the personal lines marketplace,” Greenberg responded. “ACE did a great job. We have been building — and I think the combination of the two will be compelling,” he said, answering the question.

With his answer to the specific question about personal lines business, Greenberg also echoed a refrain that recurred throughout the conference call: “The [combined] company expects to achieve meaningful growth that will result in substantial additional revenue…This is the strategic purpose of the transaction. Together, we will grow revenue and earnings more quickly than the sum of the two companies separately,” Greenberg said.

With respect to the high-net-worth segment, Greenberg said ACE puts the potential market size in excess of $40 billion, noting that Chubb and ACE together now command about $5 billion of the U.S. pie as the market leader.

The accompanying chart shows this $5 billion within a breakdown of the $17.1 billion in net premiums written by both companies together across all lines in the United States last year ($7.8 billion from ACE, and $9.3 billion from Chubb).

According to ACE and Chubb, the combined company will rank:

• No. 1 among global P/C insurers based on P/C underwriting income.

• No. 2 among U.S. commercial lines writers by direct written premiums.

• No. 1 in professional lines globally.

Chubb, a more U.S.-centric company with 75 percent of its writings in North America, will move the combined company’s U.S. premium exposure to roughly 60 percent of total net premiums written. In 2012, ACE, which has a presence in 54 countries around the globe, wrote roughly half of its business outside the United States.

“On the other side of the coin, ACE is good in the large account and upper middle market, [but] some of our product offerings are not as broad as they can be,” he said. “Chubb’s capabilities will add to that,” he noted, citing commercial automobile or workers’ compensation as lines “where ACE is not great and present.”

Greenberg continued: “When I look across the globe, including the U.S., we have been endeavoring in the small commercial and micro business — on both a wholesale and a retail basis. Chubb has been contemplating that. Together, we will drive into those markets on a global basis in a very meaningful way,” he said. 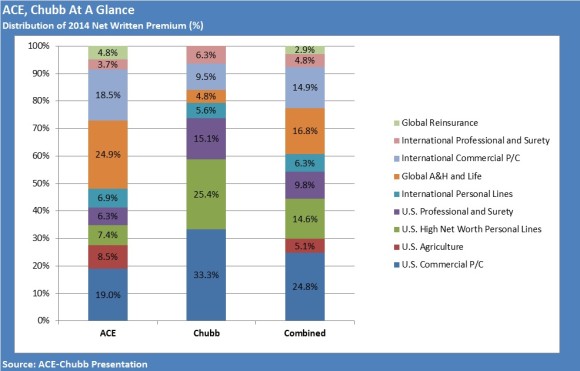 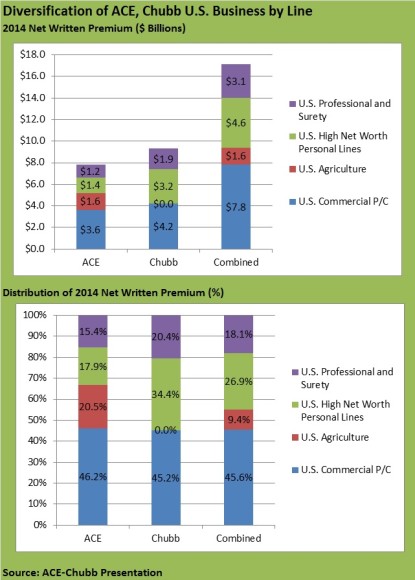